“Only the Thong Survive!”

Ashlee Graham puts new meaning to the words squash match as she lays one of the most humiliating beatings on Alexandria Hamilton that has ever been witnessed in the MMW ring.  Let’s go back.  Last year, Ashlee Graham challenged Alexandria’s older sister, Lizzy Hamilton.  The match was a slaughter, and Ashlee has done nothing but talk about how she defeated Lizzy who was so much bigger and older than her.  Ashlee took every chance she got to mock Lizzy’s size and age, boasting about how much smaller she was than the woman she pummeled.  Lizzy, too humiliated to respond, was not about to step back in the ring for another beating from Ashlee, so Alexandria, fed up, volunteers to step up!  Alex is convinced she will defeat Ashlee, and in so doing, put an end to her big mouth!  The two women enter the ring, and before the match even starts, Ashlee begins mocking Alexandria’s size, saying this will be yet another win for the twig girls.  The two lock up and immediately Ashlee takes control with a big knee and several crushing low blows that bounce Alex back to the corner.  Ashlee traps Alex in the corner with a painful, foot to the belly, mashing her foot deep into Alexandria’s soft jobber belly, putting Alex on her ass in the corner.  A stiff corner beatdown before a bonzai drop has Alex writhing in pain.  She makes her way to the ropes where Ashlee begins mocking her attire.  Ashlee soccer kicks poor Alex repeatedly between the legs, causing the thicc jobber to bounce up and down on the bottom rope.  Ashlee gives Alex a horrific wedge that has America’s BEST Jobber howling in pain and submission.  Ashlee let’s go and Alexandria picks her wedgie, Ashlee see’s this again attack Alex with an even deeper wedgie!  Ashlee tells Alex she is going to make her bottoms into a thong, and Alex is not allowed to pull it out, or risk an even worse beating.  Alex has no choice but to agree to wrestle in a thong.  Ashlee lets Alex go and picks up right where she left off, beating the poor jobber senseless.  Punches, kicks, vicious hair pulling, slams. surfboard, came clutch, scissorhold, corner work, rope work, outside ring work, and tons more!  Ashlee pins Alex belly down on the mat and panties the battered woman, revealing Alexandria’s thong panties.  Ashlee begins to again mock Alex, and makes Alex agree to receive the rest of her beating in her panties.  Alex again has to choice but to agree, and is fed the rest of her punishment in her powder blue, thong panties.  Asley removes Alexandria’s boots an makes her smell them, mashing her face into them in the ultimate show of dominance.  The show continues and Ashlee is merciless.  A final bearhug and schoolgirl pin ends the night for the younger Hamilton.  Ashlee exits with yet again, another Hamilton scalp, as Alexandria is forced to stumble around the ring in her thong, gathering the clothes Ashlee tore from her before exiting the MMW dojo in the ultimate walk of shame! 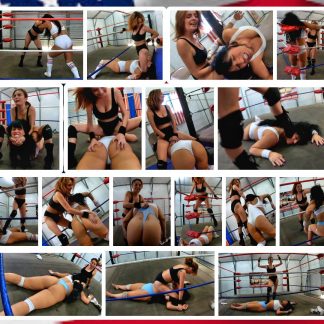