After a cocky Alex tells Athena she will never be the MMW Champion, Athena reminds her that she can destroy her with only one move, and one hand!  The ever classic strangle hold!  Alex is caught and helpless as she frantically paws, and taps out on Athena’s arm, but Athena is having none of it.  Alex is trapped in the corner, Athena throws her to the canvas, straddling the PAWG jobber and again using one hand to strangle her victim.  Alex turns red, and puffy and begins to fad, ultimately going out cold as Athena picks up an easy, embarrassing win over America’s BEST Jobber! 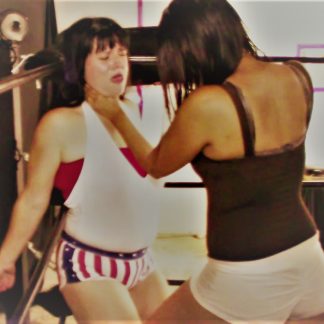