“Kiss the Hand that Beats You!”

Dana coming off a humiliating KO loss to Tsunami, in Tsunami’s boxing debut, in “Stop the fight!” and Athena fresh off a devastating KO loss to Sugar, both women want to prove their last go in the MMW boxing ring was a fluke!  After a long intense stare down, it’s time to fight!  The two women meet in middle of the ring, circling each other, sizing one another up, Dana throws first, Followed by Athena, both women spot on and effective with their combos.  However, this fight belongs to Athena Law, as it quickly becomes apparent that Athena is in a completely different league, outclassing Dana at every turn, lighting the red head up, combo after combo!  Dana’s will begins to fade as Athena continues using Dana’s gorgeous face as a punching bag.  Athena begins taunting her thicker opponent, fighting with one hand behind her back, giving Dana “free shots” However Dana is swinging at air, as Athena bobs and weaves, ducking in and out of every one of Dana’s attempts to engage. Belly punching, corner and rope work, jabs, hooks, crosses, head snaps, Dana’s hair is flying, and it snaps back and forth, bouncing side to side whichever way Athena’s knuckles send it.  Finally  with Dana against the ropes, a BIG right hook sends Dana crashing face first, to the MMW canvas, Athena picks up the 10 count, and the DECISIVE win.  Athena exits the ring and is talking to the camera outside the apron when Dana wakes up.  Dana is groggy, but aware that the fight is over, however she is not satisfied with the outcome, she begins to take her gloves off as she yells for Athena, interrupting the Heel,  and challenging her to a bare knuckle fight, right here right now.! Witnessing the beating Dana just received, Alexandria pleads with Dana to not do this. Athena stares at Dana, not sure if the red head is serious, however,  Alex and Athena  both realize how serious she is, as she climbs out of he ring and approaches Athena in a fighting stance!  Athena is not going to take chances as she squares up and throws a bare knuckle combo, straight to an already punch dazed Dana’s face, striking her in the nose and jaw, knocking Dana flat on her back on the mat outside the ring!  Alex quickly rushes to Dana’s side, scared for her well being.  Athena tries to exit the fight room, when Dana again calls her out!  Dana is still getting up, a bit cross eyed and groggy, as Alex pleads with her to just stop!  “Are you serious!?” exclaims Athena, as shes sees a stumbling dazed Dana approaching her again.  Athena grabs a dazed Dana by the hair and slams her face into the ring posts, again Dana falls to the mat, dazed and beaten silly, not fully comprehensive, but shes still not accepting her loss, again yelling for Athena to fight her like a woman!   Alexandria is begging Dana to stop before Athena really hurts her, Dana ignores Alex, charging at Athena again!  Athena easily defends, slapping a sleeper hold on Dana, right outside the MMW ring!  Dana is about to go out when Athena demands she verbally submit!  Finally Dana admits her defeat, and Athena lets her go.  But Dana needs to learn a lesson, after that unacceptable unsportsman like post match behavior. Athena keeps Dana on her knees, and demands Dana kiss her hand, the hand that beat your ass!  Dana has no choice, after the beating she just took, now on her knees with the superior woman standing above her.  She obeys Athena’s demand, and kisses her hand, giving up complete control, and succumbing to Athena’s complete dominance over her, Athena stand proud and grinning as the woman she just defeated sit in her knees in front of her, kissing her hand in submission.  Match, Athena Law! 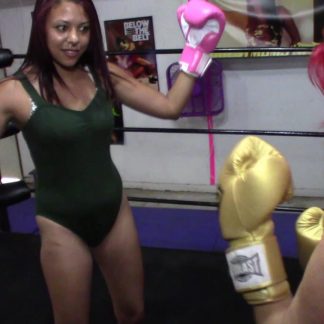