Athena fancy’s herself a badass!  And she can back up her trash talk.  Many a woman have taken a nap under Athena’s foot, Many women have stepped up, many women have been embarrassingly put down, Athena has LIGHTNING fast hands, and a bad attitude!  However, she has a full plate today! Taking on tall blonde amazon Ginger! And ginger is very confident.  Fresh off a huge KO victory over Alexandria Hamilton in “World Famous, Gold & Silver Box Shop”  Ginger is ready to shut Athena’s cocky mouth!  And MY goodness does Athena take a humiliating beating that she wont forget.  After a long, intense, stare down.  The two women square up in the middle of the ring, and its time to fight!  A fearless Athena strikes first with a 3 punch combo, connecting flawlessly with Ginger’s face, Athena dances around keeping her feet moving, throwing meaningless combos, connecting with an unimpressed Ginger , Ginger appears completely stone cold, sizing up Athena for the perfect moment, then BOOM! Ginger lights up Athena with a combo of her own, shocking Athena!  Athena remains in a state of shock, cautious now, and scared to engage, Athena had no idea the punching power of Ginger, she barely gathers her thoughts before Ginger follows up with more strikes!  Ginger stalks Athena the remainder.of the match, out striking her with ease, overpowering her in convincing fashion!  In the corners and against the ropes, Ginger dominates Athena, power punch after power punch! Gut punches!  Jabs! Hooks! Uppercuts! Athena agrees to one free shot each.  Athena’s free punch is futile, meanwhile Ginger’s free punch knocks Athena across and clear out of the ring!  Ginger verbally abuses Athena, making fun of the so called bad girl while laying down a thorough undeniable beating of the gorgeous striker!  Athena is eventually opened up and all over the ring, and Ginger’s gloves.  Athena eats canvas a few times, slowly making it to her feet to beat the count, only to suffer more of a beating as Ginger continues to abuse poor Athena in embarrassing form!  Athena stumbles around the ring, punch silly, swinging at air while Ginger laughs aloud and mocks her!  At one point ginger holds Athena at a distance with her glove, like a bully in a school yard while a loopy, beaten silly Athena flail her arms, trying to connect with a laughing Ginger’s mid section!  Athena, is out on her feet, this fight is ALL Ginger as the viewer has just witnessed the beating of Athena Law, Athena and her face are a complete mess!  She has leaked her beating all over Gingers new boxing gloves, and Ginger is LIVID!  Ginger takes her gloves off and rips a destroyed Athena to her knees by a huge handful of hair.  Athena is a sobbing mess, begging Ginger not to hit her anymore, But Ginger is livid about her gloves, as she forces Athena to lick her dirty boxing gloves clean!  Athena has no choice and proceeds to lick Gingers gloves clean,  A final victory pose relieves Athena of this humiliating display of power she suffered at Ginger’s hands! 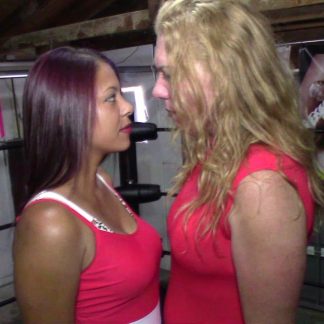