It’s England Vs. Germany in this SEXY boxing match turned wrestling match/catfight turned humiliating facesit session for the loser! Two thick, phat bottom girls, glove up! Alexandria Hamilton climbs through the ropes to box Awesome Laney Dawson! after a brief back and forth, one girl takes control and sends the weaker woman plummeting to the canvas for the 10 count! The loser is not willing to accept her defeat. The gloves come off and the two ladies lock up! Slams, chokes, hair pulling and submissions! What a chick fight! The weaker woman again finds herself in the corner, suffering a horrific ass smother in the form of a sexy stinkface! The weak woman is again overcome, but this time, the victor is not going to make sure she is done for good! The strong woman takes a seat, placing her PAWG bottom on the losers face! The loser is beside herself as she writhes under the stronger girl, unable to escape, soon her struggling ceases as she succumbs to the facesit of the stronger woman! Which lady will strike the final victory pose over her defeated KO’d opponent!? 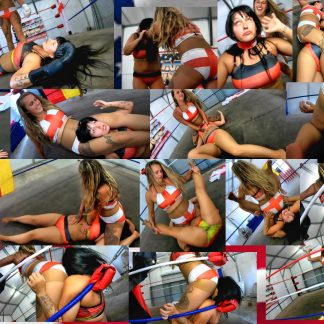