It’s the first installment of the already popular, “Panty Pro Wrestling” Series, in which the ladies fight in boots, pads, and their bra and panties.  We start by enjoying Alexandria gearing up for her sexy wrestling match.  She slips out of her clothes and into the day’s attire to go take on Tovah Nicks!  The match begins with Alex offering her hand to Tovah for a nice handshake to signify a good clean match, however she is stunned with a face swelling bitch slap that spins her around in a crosseyed stupor.  From there Tovah wastes no time punishing Alex for the remainder of the contest, brutalizing the thicc milf with vicious hairpulling, camel clutch, surfboards, crossface, rings of saturn, bow and arrow, bearhug, sleeprhold, skull crusher, back breakers, stomach claw, face claw, strikes, stiff punches, scissorholds, corner work, rope work steiner recliner, outside the ring work where Tovah punishes Alexandira’s soft jobber belly, against the ring posts, flying off the turnbuckles, low blows, guillotine, steiner recliner, bonzai drop, wedgies, hair bridge and tons, TONS MORE!  What- a- BEATDOWN!  Sexy ladies fighting in their underwear?  Isn’t that enough?  Add in Alexandria stiff beating with a final leghook pin and victory pose, and you’ve struck sexy pro wrestling gold!  Which ladies will face off in the next installment of MMW’s Panty Pro Wrestling? 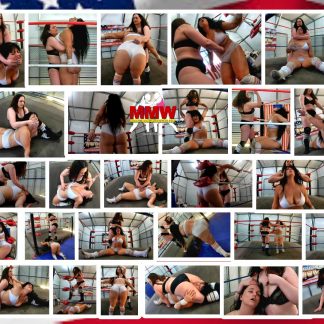