It’s the Mother of ALL Beatings!  Served hot by Vixey to a too cuter for her own good, Alexandria Hamilton!  What LOVELY tight pants Ms. Hamilton, and what a stunning Thong Leotard Ms. Vixey!  Two pro’s ready for a hard fought match, or so Alex thought.  Before Alexandria is able to enter the ring, she is ripped tot he apron by her long hair and choked on the top rope, and flung to the floormats!  Alex can barely get to her feet before she is ripped up by her hair again, this time fed a cold hard turnbuckles that sends her plummeting to the ground again!  Vixey hops out of the ring and presses Alex against the ring post where she pounds the thicc jobber’s belly before slamming her face first to the ring apron where she stops on Alexandira’s neck. causing  America’s BEST Jobberto writhe in pain, causing her phat round booty to shake in the air!  Vixey slaps on a back breaking Camel Clutch outside the ring, making Alex regret even accepting the match.  Finally it’s time for Alex to experience true pain as Vixey tosses her into the ring for what will always be known as the Mother of ALL Beatings!  Flying off the turnbuckles, ragdolling and slamming her opponent, beating the weaker woman from pillar to ring post!  Against the ropes, in the corners and center ring, Vixey launches a devastating assault, pummeling poor Alex with a relentless barrage of vicious hair pulling, camel clutch, back breaker, surfboard, and more!  Vixey repeatedly illegally pins Alex, using the jobber’s tights to secure the pin, exposing the battered woman’s satin thong panties.  Vixey is far from done as she continuously rips Alex to her feet by the hair to feed her more pain!  Snap mares, pedigree, stunner, facebuster, clotheslines, hammerlocks, wedgies, rope work, corner work, scissorholds, skull crusher, low blows, bow and arrow, hairpull back breaker, bonzai drop, belly punching, guilotine, splashes, schoolgirl pin, and a sexy, panty exposing matchbook pin!  Is Vixey done?  Not quite yet!  Alex is squeezed senseless in crushing bearhug, before she is pantsed and squeezed yet again!  Alex struggles in Vixey’s bearhug but Vixey is not satisfied as she gets a tight grip on Alexandria’s thong and wedgies her in the bearhug causing Alex to howl in pain and beg for Vixey to stop!  A final rear naked choke to a pantsed Alex seals the night for the weak jobber.  Vixey gets the 10 count schoolgirl pin before striking her well deserved victory pose.  Match, Vixey! 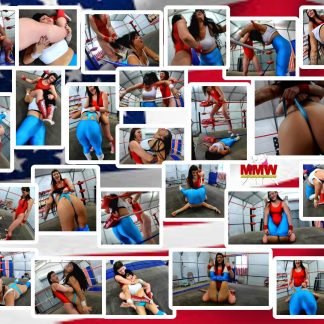