Sugar and Athena Law have a VERY long standing feud.  Both girls have given, and taken countless punishment from the other inside the MMW wrestling ring!  However, it isnot often that these two throw leather.  Sugar has nowhere near the experince going toe to toe with other women, having lost her last boxing match via KO to the legendary Kristie Etzold.  Athena on the other hand, is a hardened boxing vet.  Ex MMW Boxing Champ, has countless battles and wars under her belt.  Athena has been been knocked out, knocked out other women, defended belts, lost belts, won belts, Athena is a badass bitch, but this does not scare sugar away, who has beat Athena within an inch of her life SEVERAL times.  Poor Sugar, this is a whole new game!  Athena absolutely obliterates Sugar!  Sugar stands no chance and Athena beats her face raw!  A classic beat by petite scenario where the small girl utterly destroys the BBW!  Jabs! Hooks! Combos! Uppercuts! Multiple Knockdowns!  Witness the beating of Sugar, and this is no dream!  Athena is just to damn fast, precise, and good. Sugar’s hair is flying, and her head is snapping as Athena feeds her blow after blow, trash talking and verbally mocking her as she punches her way to the KO victory! 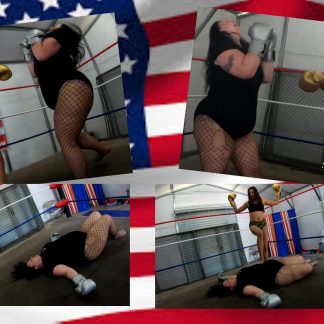