Well I suppose things couldn’t be more cut and dry here, Today, Alex, Clad in her white boxing gear, is set to box new comer, 21 year old Tammi, clad in gold top and pink booty shorts.  Alex steps in to the ring the heavy favorite, she has more experience, a few years, more ring time, and some wins under her belt, by all means, this contest should belong to Alex.  So, you can imagine the shock, when young 21 year old baby face Tammi enters, and beats the holy fuck out of her more experienced opponent.  Alex gets some solid hits in, let’s give her that.  Connecting with combos, and rallying enough to knock Tammi to the canvas at one point.  However, the bulk of this contest shows Alex on the defense, with Tammi controlling the ring and the pace of the fight.  Tammi stalks Alex around the ring, continuously connecting with combo after combo, Alex’s head snaps back and her hair flies as she eats jab after jab.  Never really controlling the fight, she is forced to retreat, with her hands up, finding her self against the ropes, and in the corners, repeatedly being pummeled by her rookie opponent.  Eventually the assault proves to be too much for America’s BEST Jobber as she struggles to stay standing being beaten mercilessly in humiliating, embarrassing fashion.  Tammi won’t let up though, she sees the fight leaving Alex with every hit she takes, she can see defeat in her eyes, and hear submission with every grunt that escapes Alex with every unforgiving strike. Finally, a vicious corner beat down puts Alex out on her feet, as she stumbles around, unaware of where she is, she stumbles directly in to a BIG right hook, literally knocking her through the ropes, and out of the ring!  Alex flops on the mat outside like a bag of hammers, KO’d, for the 10 count.  Our baby face rooking isn’t going to let this opportunity go, as she exits to place her foot on her defeated opponent, the MMW wresting champion lay beaten and dominated under her feet.  Will anyone ever believe Tammi when she tells the story of how bad she beat Alexandria Hamilton.  Well, they will certainly have too, we fade out with that very image, of Tammi, standing triumphant in a victory pose, over a defeated Alexandria Hamilton.  Match, Tammi! 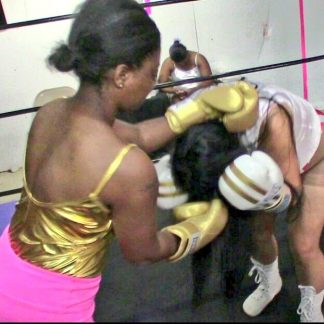