After seeing Alexandria Hamilton mercilessly beat her sister down, Tovah Nicks makes her own challenge to the MMW CEO to save the family name.  This does not go over well.  Tovah shows up to Alexandria’s dojo while she is in bed.  Alex hears that Tovah is there to call her out and is amused.  Rather than gearing up, Alex walks right out to the dojo in her bra and panties where she accepts Tovah’s challenge and proceeds to serve the angry sibling a jab filled beatdown that the young lady will not soon forget!  Tons of jabs, uppercuts, hooks and crosses.  Multiple knockdowns.  Tovah is no match for Alex!  A final haymaker sends Tovah to the canvas for a final time, scoring Alex the 10-count and the W over the entire Nicks family! 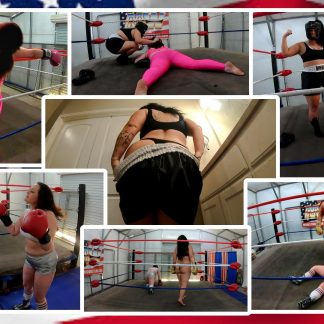