Dolly Prescott already destroyed Alexandria in her MMW wrestling debut. Embarrassing the MMW CEO by feeding her a stone cold beating and finishing Alex via KO in under 7 minutes. It’s safe to say, Dolly is regarded as the favorite in this match. However, Alex is not ready to be counted out, and is convinced that tho Dolly may be a superior wrestler, she just can’t hang with Alexandria’s striking. The 2 women slap on sexy, tight leotards. Dolly’s so pretty and pink. Alexandria’s thong is so shiny and looks so nice on her lovely round jobber booty.  The bell ring and the 2 girls meet center ring, they touch gloves and this match is underway! Both girls score great shots with head snapping jabs, both girls scoring big knockdowns multiple times. What a fight! Belly punches rumble the MMW ring, both girls swinging for the fences, we have quite the back and forth on our hands. That is, until one girl takes control, overwhelming her opponent with an onslaught or strikes! Against the ropes, and in the corners, the war wages on until BOOM! Huge uppercut puts one girl face down for the 10! will Alex get revenge on the new girl? Or will Dolly’s over confidence cost her her first boxing match in the MMW ring? 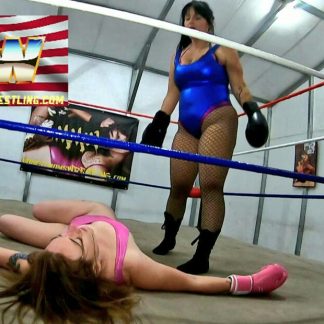