Alexandria has had her eye on a wrestler from Hawaii named Tsunami. A stone cold competitor, known for getting in the ring, not uttering a word, and putting on dominating performances! These aren’t just rumors, they ring true as Tsunami touts an undefeated record! This doesn’t impress Alexandria as she mocks the wrestler online, and, with oceans separating them, issues a cocky challenge she would have never thought would be answered. Oh poor Alex, guess who showed up at the MMW ring? Tsunami is here! And geared up! Known for having granite fists, and being lightning fast, Tsunamis presence alone wins her the pre-fight.  Alexandria enters the ring beaming ear to ear, clad in her trademark stars and stripes. From all looks of it, Alexandria looks ready to fight! Well, fight she does! After an INTENSE stare down, the two lock up! From the bell, Alexandria looks great! From the lockup, Alexandria’s superior strength is apparent as she forces Tsunami into the corner! Overwhelming her with vicious face strikes and belly punches! Alexandria is geared up to fight today folks! She backs to the opposite corner, for a rolling somersaults super punch! Rocking Tsunami and dropping her to the canvas! In the corner, Tsunami is seeing stars as Alexandria’s smile lights up the room and she dances in the middle of the ring, mocking Tsunami as she scrambles to her feet, “you want a piece of this?” says Alexandria in a very cocky tone! Alex springs off the ropes for a hard right to tsunamis head! And again! Against the ropes for another hard right, this time dropping the feared striker! Is Alexandria about to pull off a huge upset? She pulls Tsunami to her back and hooks her leg! 1! 2! Tsunami kicks out right before 3, and a visibly annoyed Alex slaps the mat and gets up, turning her back to Tsunami and stomping her feet and grabbing the ropes in protest of the slow count. BIG MISTAKE with Alexandria’s back turned Tsunami springs to her feet! Rushing Alexandria in to the corner and unleashing an avalanche of ferocious strikes! Alexandria’s head snaps back, and her hair fly’s with every rock hard strike to her pretty face! Tsunami goes north to her jobbers tummy! Blow after blow! folding Alex in half, her shapely bottom shaking with every strike, Tsunami whips Alex into the opposite corner. With such force she bounces off of the turnbuckles directly into a bulldog! Planting Americas Best Jobber face first in to the MMW canvas! With Alexandria face down, Tsunami removes the MMW champs belt, and, straddling her back, she uses Alexandria’s very own belt to strangle her with. Alexandria flails wildly kicking and slapping the canvas while Tsunami mercilessly wrenches on her jobbers neck! Squeezing tighter! Alexandria begins to turn red and Tsunami releases her. Not for more than a moment as she rips Alex to her hands and knees, walking her by the hair across the ring to the middle rope. Tsunami places her knee on the champs back, choking her across the rope! Alex gags and gasps for air until finally Tsunami releases her. Alex falls to the floor and attempts to escape the ring. Tsunami is too quick! And catches Americas Best Jobber by her hair, pulling her back to the canvas, she takes a two-handed vice like grip on Alexandria’s hair and proceeds to torture the MMW champion with vicious hair pulling! This is no bar fight! But Tsunami has a death grip on our jobbers hair! Grabbing a giant chunk, and I mean a CHUNK, Tsunami pulls with all her might as Alexandria screams in absolute horror! Tsunami proceeds to tare a gob of Alexandria’s hair right out of her head! Hoisting Alexandria’s hair in the air, and waving it around like a trophy as Alex sobs, still tied up in the ropes. It is all Tsunami from here, as she Pulls Alex into the ring for 3 consecutive strikes to the champs face, sending her crashing hard to the canvas each time! Tsunami follows up with three hard headbutts! Again sending the fading champ to her back over and over! Tsunami rips Alex to her feet by the hair and proceeds to play pinball with the rag doll. Tossing Alex from corner to corner, hair mare after hair mare, giving new meaning to the phrase “beaten from pillar to post”! There is no fight left in our champion, as Tsunami continues to impose her will. Tying Alex in the ropes, beating her midsection, with no mercy! She drags her jobber off the ropes by her ankles and to the middle of the ring for a ring shaking, face breaking, face buster! Again, Alex is dragged to her feet for a neck cracking stunner! Lets see another one from the back! So we can see Alexandria’s lovely bottom shake! and STUNNER! Two stunners, and Alex is out, glassy-eyed staring at the ceiling. Tsunami hooks Alexandria’s leg for the three count, and walks out of the ring without saying a word. Leaving a bewildered Alex on her back in the middle of the ring. Feeling a bit detached from reality! 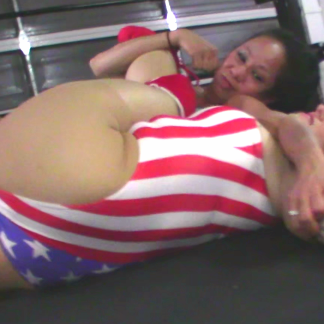