It’s an MMW Tag Team Showdown!  Entering the ring first is the team of Megan Jones, and Athena Law, climbing in to face the team of Alexandria Hamilton, and Awesome! Laney Dawson!  Alex and Laney clad in shiny, gold, bootyful leotards, with gold boots, and white gear, go to shake the black and red clad team of Megan and Athena, only to be ambushed with merciless strikes and kicks, the gold team being backed in to the corner, and stomped down side by side, in true beat down fashion!  Megan and Athena control the ENTIRE fight!  Mercilessly beating the blonde and brunette team silly, humiliating them with punches, stomps, crotch attacks, low blows, hair pulls, slams, smothers and chokes!  Reducing the cocky golden girls to whimpering pathetic piles of jobber rubble!  Over the knee back breakers, double belly punishment!  Double clutches, double sleepers, double head scissors, double beat downs!  Athena is all smiles and sarcastic remarks throughout the match as she is overjoyed to have gobs and handfuls of Laney’s long blonde hair to yank and rip and pull to torture the sweet local girl with.  Megan Jones didn’t forget the KO loss she suffered to Alex in their previous meeting, however, that was boxing, and this, is wrestling!  Megan brutalized Alexandria, using the ropes and the corners to her advantage to trap America’s BEST Jobber, subjecting her to vengeful punishment.  Besides being sat side by side, and force fed beatings together, the girls are also pinned down and held up by their hair, forced to watch the other endure a horrific belly beat down!  Fish hooks and clutches contort the gorgeous golden girls faces, while their antagonists merely laugh at their suffering.  All the Alexandria, and Laney’s pleas and whimpers, all their pitiful moans and groans, all the pathetic begging, falls of deaf ears, as Athena and Megan take sadistic pleasure in tormenting the blonde and brunette.  At one point, the girls are put in side by side sleepers, with Athena snidely saying “first one to twitch gets a beating”  Sadly for Alex, she succumbs to Megan’s mighty sleeper, and begins twitching in her vice like grip, and as Athena said, she earned a horrific 2 on 1 belly beating!  There are so any tears and purple faces, so many jiggling booty’s and faces being slammed, so much hair being pulled, so many asses being slapped, it’s a squash match lover’s dream, and a paradise for the seeker of jobber’s!  Two HOT leg hook pins end this contest, declaring Megan and Athena the EASY winners!  Are Alex and Laney even going to walk out?  Or does the MMW lean up crew need to come dredge the ring!? 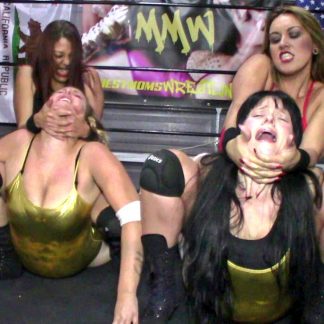