Lizzy Hamilton and Laney Dawson step in to the cage to lock up in a battle to decide who the real, MMW Blonde Bombshell is! Laney clad in a sexy, cheeky, pink camo bikini, and carrying the MMW hardcore title she won by destroying Lizzy’s little sister, Alexandria in the first MMW Cage Match, enters the ring confident as ever, whole heartedly believing she can defeat the elder Hamilton sister just as she destroyed the little Hamilton sister! Lizzy enters and is as stone cold as we have ever seen her. Without saying a word she enters the cage and gives the camera a flex. Lizzy is hungry for MMW gold. Once half of the dominant MMW Tag Team Champions, the Hamilton Sisters, Lizzy had her dreams dashed of winning the MMW Boxing title by suffering a late KO loss to Andrea Rosu. Lizzy has been publicly saying she wants Jezabel Romo for the coveted MMW title. However, it is well known Athena Law is next in line for a shot at Jezabel. This leaves Lizzy no choice but to throw her hat in to the hardcore pool and challenge Laney for her gold strap! The steel door closes and the match is underway! Laney is overwhelmed at the beginning, being cornered and suffering a barrage of knees. Does this set up the remainder of the match? We have two, blonde, PAWG Milf’s, a cage, and animosity. We have a fight! Punches, kicks, knees, Irish whips, scissor holds, hair pulling, rope work, and more! One woman has her face dragged across the unforgiving chain link! One woman is clearly in control as the other suffers at her will. A steel chair enters the mix, one woman is busted open and laid over the chair as she has soccer kicks thrown in to her gorgeous face. An intense beating occurs, followed by the ultimate humiliation, as the loser is pinned in a daze and ripped to her knees by her hair! The winner demands the loser put the Championship belt on her and kiss it, to which the loser has no choice to obey! What, a, match! 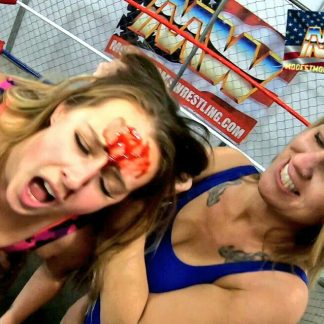