Athena Law, and Harper Rose finally meet in the MMW ring to throw blows!
Athena is fighting a bout of ring rust after a layoff, meanwhile Harper Rose is on a 3 fight win streak since her debut, besting both Laney Dawson, and Alexandria Hamilton in 2 vicious, hair pulling, catfights! She then went on to score the biggest upset of 2020 thus far, out striking Laney Dawson and ultimately knocking out the gorgeous blonde MMW vet. At this point in time, Athena REALLY needs win, after having her ass handed to her by Dolly Prescott, she is not about to be humiliated by another rookie! The two fighters await the bell in their corners and this fight is on! Jabs! Hooks! Uppercuts! Belly punches! Crosses! Combos! The hair is flying and the heads are snapping as each girl dishes and takes a ton of punishment. Each girl kisses the canvas multiple times. Eventually one girl finds herself gassing out and on the wrong side of a flurry or strikes! This fight ends in a KO! Has Athena shaken her ring rust off for good? Or does Harper do the unthinkable and knockout former MMW boxing champ Athena Law!? 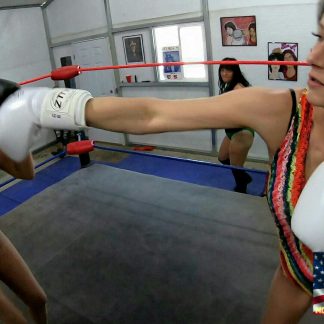