Athena Law is known for punk’n bitches! Not only does she hold the MMW Boxing Title.  She’s also known to don the spandex leotards, and scrap with the MMW wrestlers, handing out thorough beatings to any woman who dare challenge her!  A long list of women have taken naps under Athena Law’s wrestling boot!  Including Alexandria Hamilton, Lizzy Hamilton, Dynamite!  Dana, Claire Voyant, even Megan Jones felt the ferociousness of Athena’s might!  However, when Mega Heel, and MMW terror, Sugar, is in town, she steps aside to no one!  Athena had to learn this the hard way in “Sugar destroys Athena” in which Sugar mangled Athena Law  literally beating her from pillar to post, handing the so called bad girl her most decisive, and humiliating loss, being completely dominated by Sugar in overwhelming fashion throughout the entire match, ultimately being KO’d by her vice like brain wrench! Well, Sugar is back in town, and Athena is ready to show the MMW girls that her first loss was a complete fluke!  Sugar gladly accepts Athena’s request at a re-match, and the fight is set!  The two heel’s lock up in the middle of the ring, Sugar immediately sends a huge knee right in to Athena’s belly, folding her in half!  Sugar grabs a handful of hair and sends a huge forearm across Athena’s back, crumbling the poor woman and sending her flattened, face first to the canvas!  Sugar rips Athena to her feet by her hair and drops another forearm across her back, again, sending Athena crashing to the mat.  Let’s have another!  Athena is yanked to her feet by the hair again, for another devastating blow to her back!  This is a TOTAL SQUASH MATCH, as you witness the beating of Athena Law!  Sugar holds nothing back in this re-MISmatch! As She works over Athena from corner to corner with devastating strikes to the face! Working Athena over in the corners sending missiles crashing in to her jaw!  Athena suffers greatly from beginning to end, belly punching! bone breaking camel clutches, face torturing fish hooks, scalping hair pulls, neck wrenching headlocks!  Humiliating punches to Athena’s face, sending her crashing to the canvas, shaking the MMW ring along with the two female combatants bodies!  Athena is tossed out of the ring, and Sugar is not far behind, with a back breaking reverse surfboard! Standing on Athena’s hair, Sugar all but tears Athena’s arms from their sockets, as Athena’s moans and groans fill the MMW room!  Bottom’s up Athena! Poor Athena’s back is on full arch, her lovely bottom pointing straight to the roof, on full display for her superior opponent!  Don’t think Sugar isn’t aware of Athena’s perky booty staring her straight in the face, Sugar drops Athena arms and takes hold of her skin tight, camo leotard, yanking as hard as she can, pulling it deep in to Athena’s bottom!  Athena’s legs kick the mat frantically as she screams in horror while Sugar uses Athena’s leotard as a suitcase handle! Athena is let go, and Sugar rips her to her feet and sends her face first into the outside ring post, not done, she drags Athena by the hair to the next ring post, bang, bang! Athena’s head clanks against the steel and Athena is tossed to the mat like trash! More torment ensues, as Sugar re-enters the ring, repeatedly picking up Athena by the wedgie and hair, just to throw her back down to the canvas, throttling the woman in devastating fashion!  Sugar slams Athena’s head into the turnbuckles repeatedly, literally beating her cross eyed!  Athena’s eyes cross, and all fight has been drained from her as she is rag dolled, slammed face first over and over in to the top turnbuckle, being held tightly, by her hair, unable to escape Sugars powerful grip!  Athena is down, much more destruction continues, as Athena is completely outclassed and dominated in merciless fashion for the remainder of the match.  A KO’d,  Athena is folded in half, bottom high in the air, for a modified, standing matchbook/spanish press pin, as Sugar flexes her massive arms standing.over her defeated opponent!  Match Sugar! 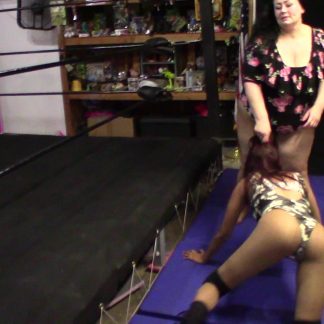