View cart ““Undisputed!”” has been added to your cart.

Jezabel Romo is the new MMW Champion! After absolutely destroying Alexandria Hamilton and taking the MMW belt. She is now forced to defend said title! However Jezabel is a busy woman, also being the Lucha Girls champion, she is annoyed she has to defend a belt she only keeps to further humiliate her sworn enemy, Alexandria Hamilton. Jezabel doesn’t plan on giving this belt up to anyone, let alone MMW alumni, no, she wants the belt as FAR away from Alex as possible. Jezabel has made it very clear, that the only way the MMW title is going back to Northern California, is if Alex gets in the ring with her for a third time, and rightfully wins it. However Alex is in no hurry to square up with Jezabel quite yet. Still bruised and battered from their previous match, Alex recruits MMW Superstar, Awesome Laney Dawson! And Laney is very confident she can best the SoCal Cougar, and bring the MMW strap back to its proper home. Jezabel enters with the MMW title around her waist. The first time the belt has been home since Alex lost it, and Jezabel plans on taking it right back to SoCal with her! Enter Laney Dawson! Accompanied by none other than Alexandria Hamilton, and its not but a second before Jezabel and Alex start having words. Jezabel mocks Alex while Alex attempts to ignore her, trying to focus on Laney, and giving her a pre match pep talk. Its time to fight! Laney goes to enter the ring, but is stopped short as Jezabel grabs the ring rope while Laney tries to climb in, yanking it up and down slamming it in between Laney’s legs! Laney falls to the apron and out of the ring, she gets back up, but is quickly given a hand as Jezabel reaches out of the ring, literally ripping Laney to her feet and up on to the apron by gobs of her thick, long, blonde hair! Jezabel runs her to the corner and repeatedly slams her gorgeous face into the turnbuckle! Laney crumbles again, and falls out of the ring on to the mat. Jezabel mocks and laughs at the MMW girls, telling Alex, “Your girl can’t even get in the ring!” Laney makes it to her feet on wobbly legs but is again, yanked to the outside apron by the hair, and hanged on the top rope! Jezabel smiles while Laney kicks her legs and struggles, dangling from the top rope! Jezabel lets go and Laney falls to the outside ground again, and still has yet to enter the ring! Jezabel is tired of waiting, and hops out of the ring to punish Laney even more! Jezabel goes into full heel mode! PULVERIZING Laney Dawson! Smashing and shattering any hopes Laney had of becoming a champion that day. Jezabel uses back breakers, vicious hair pulls! Head scissors and chokes! Bouncing her booty in front of poor Laney’s face in complete control of the match! Laney is finally thrown in to the ring, and Jezabel is not far behind. The remainder sees Jezabel woman handling Laney! Dominating the blonde amazon. This is a total squash match! Leg locks, chokes, sleepers, wedgies, slams, rope work, corner work, trash talk, power moves. Jezabel uses her pro background, and superior experience to completely embarrass Laney. How does Laney’s night end? Loudly? In a screaming submission? Or abruptly? With a clean KO and pin? Either way, your winner, and STILL, MMW Champion, Jezabel Romo! 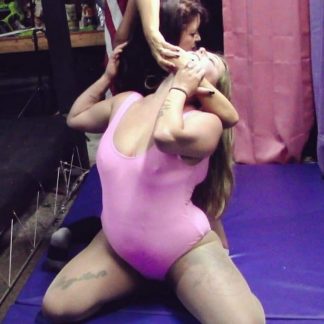