Andrea Rosu has traveled to the MMW dojo to face the CEO herself, Alexandria Hamilton. Andrea enters the ring wearing a shiny, thong leotard. Alex makes fun of the Muscle Queen, saying who would ever wear a thong to wrestle in? Well, now, YOU will, Alexandria! Andrea wastes no time, not only telling Alex what a bitch she is, but also showing her! Corner work, rope work, belly punches, low blows. Did we mention Andrea continuously humiliates JobberGirl Alex by purposely taking every chance she gets, to wedge Alexandria’s leotard deep into her round, jobber bottom! Andrea mocks Alex over and over, “Who’s wearing the thong now!?” Andrea takes pleasure completely dominating Alex in convincing fashion! Slams, chokes, hair pulls, and ass slaps, are just a few tools Andrea uses in between wedgies to show the world what an inferior wrestler Alex is! Cobra clutches, sleeperholds, camel clutches, smothers make it a looong day for America’s BEST Jobber!
Andrea destroys Alex. Leaving quite the impression on the other MMW girls as they watch in shock as their leader is pummeled, and punked like a total bitch, infront of her collegues eyes. Think Alex will EVER be able to put on a thong again? A final crotch stetching, arm twisting, neck wrenching hairpull, proves to be too much for Alex. She gives up, but Andrea insists she says “I submit!” Alex has no choice as she cowar in the complete control of Andrea. Alex yells, “I SUBMIT!” in painfull and frantic desperation. Match is over. Alex lay, humiliated in her new, make shift thong leotard that Andrea was so kind to make her. The woman who entered the ring a cocky competitor, is now a bruised and humiliated footstool for Andrea’s dominant, victory pose. Match, Andrea Rosu. Another MMW, MUST HAVE, for any Squash Match fan! 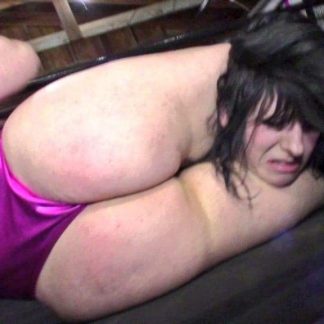