Harper Rose finally locks up 1 on 1 with MMW Barbie Doll Platinum Fury in a sexy blonde vs brunette battle between 2 hungry MMW Title Contenders!  Harper has had enough with Platinum’s hype and is ready to prove she deserves the next shot at Gold.  Platinum is less than impressed with Harper and walks in expecting to make this a quick contest in her favor.  The bell rings and Platinum’s plans are swiftly dashed to pieces as Harper pounces on the novice blonde and feeds her a steady diet of punishment in what turns out being a completely one sided squash match!  Platinum is all jobber as she is pummeled from pillar to ringpost with punches, kicks, stomps, vicious hairpulling, headlocks, leglocks, low blows, slams, rope work, corner work, back breakers, headscissors, bow and arrow, stunner, pedigree, camel clutch, bearhug, surfboard, boston crab, and tons more!  The assault continues until Platinum is laid out for the leg hook pin and victory pose! 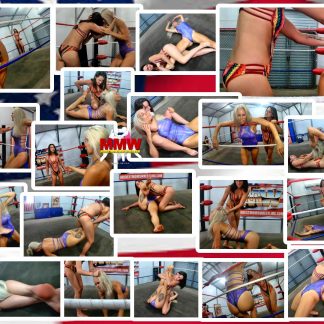