Shelly Martinez is back! Chosen to represent the Nation of Mexico, Shelly stunned everyone at her previous visit when she destroyed Laney Dawson, in a match that MANY had predicted Laney would easily win. Shelly then went one on one with the USA when Alexandria Hamilton was able to secure her Nations bragging rights by hitting a stunner on Shelly to get the 3 count, and pick up the win! Now Shelly is back, and has a bone to pick with the red, white, and blue! But not the USA, no, this time, Shelly is here to face Dynam!te Dana, who is representing her respective Nation, the U.K.! Dana picked the wrong day to square up with Shelly, as Shelly fires up all 8 cylinders to mop the ring canvas with Dana, in what is easily the most thorough squash in the “Quest” series! If you thought Laney Dawson took a beating, then your jaw will drop when Shelly unleashes on poor Dana! Dana is immediately stunned and speechless at the assault Shelly launches on her! Vicious gut punches, jaw breaking face punches, vicious hair pulling, chokes, corner work, rope work, STF, snap mares, bulldog slam, and face buster are just a few of the moves Shelly uses to deconstruct Dana! A final ring shaking stunner sends Dana flattened face first to the canvas! Nothing fancy for Ms. Mexico today, as she slaps on a leg hook pin to a limp defeated Dana. Match, Shelly Martinez! Sorry Dana, it may be time to reconsider career paths after that beating. 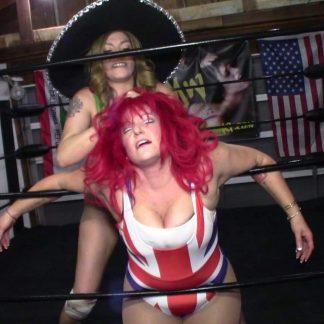