The Hamilton sister are the reigning MMW tag team champions, though times have been a bit rough as of late. Blonde Lizzy Hamilton is a force in her own right. She is strong, pretty, skilled, and respected. Unlike her brunette sibling, who spends most of her singles matches having her hair pulled out and her blood spilled on the canvas. Lizzy has heard rumors of a running joke, that Alexandria’s poor luck is beginning to rub off in their tag matches. Most recently Lizzy was absolutely pummeled by Athena and Sugar, trying to make up where her sister lacked. Enter Sue, a well-known wrestler from the east, visiting California. Sue brings havoc on poor Alexandria, beating her senseless, stripping her of her clothes, and forcing her foot halfway down Alexandria’s throat. That was the last straw for Lizzy.  Enter Alexandria, geared up to defend her tag title with her sister, Alexandria enters the ring in a shiny silver leotard, barefoot and bare-legged, with pink knee pads to match her pink Tag Team Championship Belt. Alex is all smiles, until Lizzy enters, clad in black from head to toe, boots, pads, leotard, Lizzy is wearing the same gear sue wore the day she mangled Alexandria!! Alex asks why she is dressed that way. Lizzy wastes no time, responding and telling Alex she is joining Sue, and is tired of having to carry their tag team.  A baffled Alex has no time to prepare, an Irish whip sends her across the ring, and sprung off the ropes right into Lizzy’s big boot! Alex is dropped to her back as Lizzy imposes a series of stomps on her younger sister! As if trying to create a hole in the ring she stomps away at her dark-haired half as Alexandria cries out loudly in pain and horror as her big sister stomps away. Lizzy lifts Alexandria’s legs for a series of crotch stomps, causing Alexandria’s body to shake! Lizzy moves north, grabbing Alexandria by her pony tail, or, (jobber handle) and placing her boot on Alexandria’s throat, lifting Alex’s head into her boot, strangling poor Alex. Alexandria gasps for air, about to lose consciousness when Lizzy pulls her to her feet, tossing her into the corner! Alexandria hits the corner with massive force! Shaking the MMW ring! Lizzy is right behind with a big corner splash! Alex is whipped to the opposite corner for another splash! Alex ia visibly shaken but Lizzy pays no mind, dragging her younger sister to the middle of the ring by her jobber handle, and feeding her canvas with a great big, ring shaking face buster! Alex kicks the canvas in pain and protest, but her anguish is ignored as walks her like a dog by her pony tail to the corner where she instructs Alex to bend down and untie her boots with her teeth. Alex is sobbing as she does as instructed. She is then backed into the opposite corner for a marathon of stomps to her face! Bloodying the brunette champs face and blackening her eyes! Lizzy tosses Alex to the opposite corner again for a trachea crushing Stacey Keibler choke!  Alex falls to her bottom, as Lizzy proceeds to stuff her little sisters mouth with her foot! Just as Sue did, Alex is gagging and drooling, wide eyed in horror, memories of the beating she suffered at the hands of Sue cloud her mind as she frantically taps on her big sisters calf! Lizzy puts Alex on all fours, facing the turnbuckle and unleashes and extended combo of punches to the back of Alexandria’s head! Alex head bobs and her shapely bottom shakes with every blow! Lizzy commands Alex to bite the turnbuckle, setting her little sister up for her signature California Smile! Alex does as instructed as Lizzy winds up for a huge stomp to the back of Alexandria’s head! Causing the champ to go wide eyed! Alex is done, there is zero fight left in her, but this does not stop Lizzy from dragging her sibling to the middle of the ring for the pin and a bloody foot smear across Alexandria’s mouth! Think shes done, well just about, but not before the ultimate display of disrespect and disregard as Lizzy spits on her sister bloody sobbing face, Alexandria lay helpless as her big sister continues dribbling spit all over her beaten sister face. Lizzy exits the ring to Alexandria’s cries, as Americas Best Jobber lay overly defeated in the MMW ring!. 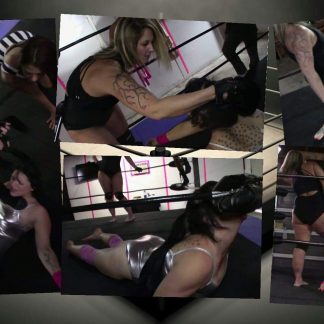