Its time for a wrestling match! Enter Sugar! The most powerful woman on the MMW roster! She fears no one, not even resident bad girl Athena Law. Athena is known for her catty attitude and ass kicking abilities. But, who dares step to Sugar!? Enter Athena, clad in red, always ready for a fight! After an intense stare down the two heels lock up! Immediately Athena is VASTLY out matched! Put in a neck breaking side headlock, Sugar isn’t even breaking a sweat! Making Athena squeal! Its to the ropes Athena! And straight into Sugars brick of a fist! POW! Athena Law hits the canvas! Sugar uses little strength lifting Athena to her feet by her hair, and whips Athena like a rag doll into the corner! Athena strikes the corner with massive force, knocking the wind out of her! She stumbles forward into sugars grasp, and is whipped into the opposite corner! Sugar continues this pattern! Throwing Athena back and forth from corner to corner like a rag doll! Every time Athena hits the corner she crumbles more and more! Until she cant even stand, she falls lifelessly face first in the middle of the ring! Sugar brings Athena to her knees for a crushing camel clutch, the bad girl ain’t so bad after all! As Athena appears as mere putty in Sugars hands! She is held helplessly in Sugars clutch! Holding her in position Sugar graduates to Athena’s eyes for one of the most brutal eye gouges in women’s combat history! Athena shreaks in horror while Sugar showcases her complete dominance! “Now you’re a blind bitch!” Sugar says in a sinister tone! Following up with a eerie laugh! Perhaps someone should stop this!? Sugar heads north to Athena’s beautiful long hair, and appears to try to scalp her jobber in the middle of the ring! Yanking on Athena’s hair as if trying to pop her head off! Sugar throws a helpless Athena to the canvas face first. Ms. Law is in pure shock! But Sugars on her! Yanking her to her feet again by the hair, and throwing her into the corner like a paperweight! Sugar winds up and strikes Athena with massive hooks! Each one knocking Athena silly and senseless! Sugar focuses on Athena’s gut! Sending devastating, deep, hard punches to Athena’s stomach, folding the Maj. in half in the corner! Sugar brings Athena to the center of the ring and puts her on her knees Athena cant see straight or even mutter the words “please stop” from the beating she has taken at the hands of her powerful foe! Sugar slaps a head vice on
Athena, squeezing with all her might! She grits her teeth, as if trying to make Athena’s eyes pop out! Athena convulses and her eyes roll as she loses consciousness in Sugars hydraulic grip! Sugar releases, and Athena falls face first, KO’d to the canvas! Sugar needs no pin, her fists just did all the talking for her. She places her foot on the Maj for a victory pose, sorry Athena, when Sugar is in town, you’re just another bitch! 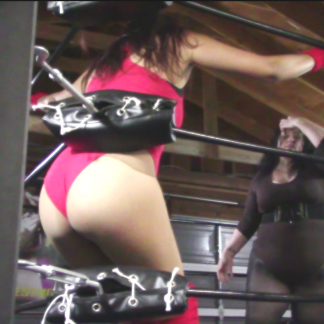