Claire is very excited for her first match! She’s new, but has BIG potential, so she has been matched up against Alexandria in an exhibition match. Enter Claire, bright neon green tights, cover her thick lovely thighs, bright pink, knee-high converse boots, and a black, skin-tight, long-sleeved, one piece leotard hugs her full-figured bottom perfectly. She enters to find Alex sitting in a chair, clutching her tummy, Alex tells Claire she’s not feeling well at all, and isn’t sure if she is able to fight today. Lucky for Claire (or not so lucky) Athena Law is also in the building, and quickly stands up, and offers her services to Claire.  She is WELL aware of Athena’s reputation, and fighting skills, so she gladly declines Athena’s offer, and continues to try to coax Alex into sparring with her. Athena isn’t going to take no for an answer, as she strips off her pants and shirt to reveal a sexy leopard print leotard, hugging her bottom SO tightly, and gold wrestling boots. It’s as if she knew she was gonna get to beat some ass today. Claire looks Athena up and down in her sexy attire, and is too shocked and intimidated to respond. Athena climbs through the ropes and in to the ring, and challenges Claire to enter. Claire is standing in front in front of the owner of MMW and does not want to appear scared, or weak, so she reluctantly enters the ring, to wrestle Athena! The two combatants circle each other, sizing one another up, It’s Claire who shoots to lock up, but in a flash, Athena bitch slaps the rookie straight across the face, sending Claire crashing to the canvas in embarrassing fashion. Athena laughs while Claire makes her way to her feet. The two women circle each other again, and again, Claire goes for a lock up, only to eat another razor-sharp bitch slap across her other cheek, sending her face first to the canvas again. Athena is to anxious to squash the new young wrestler, grabbing a handful or Clair’s hair and ripping her to her feet. It’s all Athena Law, as you witness a dominating squash match of Claire. The veteran throttles the rookie from corner to corner and all around the ring, all while Alexandria watches safely from outside the ring. Corner beatings, punches to the face, belly punches, camel clutch, side headlock, vicious hair pulling, various pro wrestling moves. Make it clear who is in control. Athena places Claire in the corner, and spreads the jobbers legs, throwing multiple crotch crushing soccer kicks between Claire’s legs! Low blow after low blow, Claire screams in complete Agony, Athena continues her domination, stepping on poor Claire’s fingers, crushing them in to the canvas. Claire is ridden around the ring like a pony, Athena using handfuls of Claire’s hair to control the direction of her inferior opponent. Much more punishment continues as Claire is beaten mercilessly around the MMW ring. Athena tosses her outside to work her over in front of Alex, sending Claire face first to the ring posts, choking her on the ring apron, using her foot to hold Claire down by the back of the neck, pointing Claire’s thick round bottom towards Alex. Alex watches with mixed feelings, having felt the same wrath of Athena, that poor Claire is experiencing right now. Athena tosses Claire back in to the ring. And challenges her thicker opponent to a bare knuckle boxing exchange! Claire refuses to engage with Athena, but Athena tells her either fight me, or you aren’t leaving. Claire reluctantly takes a fighting stance, and throws multiple swings, completely missing and connecting with only air. Athena returns with a FLURRY of face shots! Dozens of strikes connect with Claire’s jaw and nose, snapping her head around, Claire’s hair is flying as she eats each shot Athena throws! More damage is inflicted on Claire, As Athena uses mandible claws, head scissors, hand smother, and high kicks to beat Claire senseless. A BIG neck snapping stunner puts Claire on her back, glassy-eyed, and completely dominated. Athena is not quite done, yanking Claire her ass by her thick hair, Athena slaps on an air tight sleeper hold! Claire flails wildly in Athena;s control, slapping and pawing at Athena’s arm, she begins to slow down, as her flails turn to twitches and convulsions. Claire is slowly going out, Athena can feel all the fight leave Claire’s body, her shakes cease, and she goes limp, trapped in Athena’s arms. Athena lets her go and a KO’d, defeated, Claire crashes to the mat, dominated and humiliated. Athena hooks Claire’s limp leg, putting her booty to the roof, Claire lay motionless as Alexandria counts her out, giving Athena the decisive win, and, making a Claire’s big debut, nothing more than a humiliating beating of a loss, much like many women, who have fallen under Athena Law! 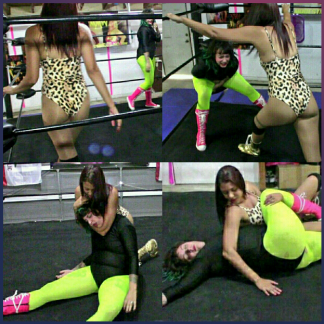