What a battle! 2 Years in the making, Scars & Stripes 2!  Tsunami, and Athena Law believe they are the real tag team champions, representing their SoCal promotion, they have traveled up North to face the MMW Tag Team Champions, The Hamilton Sister!  Each team gives a trash talking promo, giving their thoughts on the other team, and who the real champs are.  Today, both sets of belts will be unified and strapped to one team who will be considered the true, tag team champions!  Both teams make their way to the ring.  You can literally cut the tension with a knife.  The bell rings, and this battle is underway!  An instant classic!  One team taking the early lead, only to lose control within the battle, succumbing to the superior teams strength, and skill!  Multiple tag in’s, plenty of slams, hair pulling, chokes, strikes, moaning, groaning, grunting and whimpering.  Plenty of submission holds, trash talk, double teaming, and more!  The brawl spills outside the ring, neither team wanting to give up their gold.  Finally, one team overcomes the weaker girls.  After being punched, kicked, choked, slammed, bent, twisted, thrown, tattered, and torn, one team lay KO’d!  Their gorgeous round booty’s sticking straight in the air, as the superior team uses the loser’s asses for footstools for their triumphant victory pose, hoisting both sets of belts, it is now clear who the undisputed Champions are! 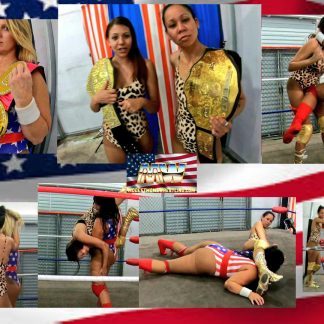