It’s been 9 months since Athena Law donned the leotard and laced up the boots to climb in to the ring and lock up with another sexy lady! During her absence many women have thrown their name in the pool for a shot at MMW gold, however their is one competitor who has caught the attention of spectators, and stood out among the rest. That being, Dangerous Dolly Prescott. Dolly has compiled an impressive record with big KO wins over top competitors, needless to say, Dolly is on fire! Women’s Wrestling social media has exploded with talks of a future Dolly Vs. Athena super match, with most experts, considering Athena’s record, predicting a somewhat easy win for the battle hardened, more experience Athena Law. Nonetheless, catching wind of the hype, Dolly openly stated she would be happy to fight Athena as soon as “Ms. Law” is ready. Athena is the last person to turn down a fight, and though on paper, Athena has much better stats, more experience, and superior strength, Athena’s inner circle, trainers, and friends have urged her to wait, and get a few warm up fights in before challenging the fresh, and hungry Dolly. However, like with everything else, Athena ignores the warnings to not wrestle Dolly, and requests her return bout to be against the dangerous up and comer, Dolly Prescott. Dolly is more than happy to sign the papers and make it official, very confident she can defeat Athena, and is well aware a win over Athena Law would be huge for her female fighting career. It’s fight day! Both women are in studio and geared up for battle. Dolly enters first, wearing Athena’s trademark gear, just as a shot at Athena, she dons the same gear that Athena has KO’d many women in! Athena enters in head to toe sexy white pro gear! White leotard, white boots, white accessories. Despite her nearly year long layoff, Athena looks damn good, ready, and focused as always, we are in for a fight!
Both women go to their respective corners, and have only a moment to adjust their gear, and size one another up. Athena smirks at Dolly from across the ring and snidely asks her “What the fuck are you gonna do?”, to which Dolly very simply and confidently responds, “Beat your ass!”.  The bell rings and this bout is officially underway! Both women lock up center ring. They struggle for only seconds before Dolly goes low and rushes Athena to the corner, slamming her against the turnbuckles! Dolly unleashes a flurry of punches that lads spot on, om Athena’s jaw, stunning the MMW Bad Girl! Dolly goes low again and sends huge, hard, deep punches in to Athena’s belly, Athena has no answer and is flustered as Dolly grabs a handful of hair and slams Athena’s face in to the top turnbuckle causing Athena to go limp and fall to her knees. Dolly plants Athena’s face in to the bottom turnbuckle and stomps the back of Athena’s head, taking a page out of the California Queen’s playbook and serving Athena a brutal California Smile! What the hell is happening here!? Athena bare catches her breath before Dolly puts her on her back, sitting on Athena’s face she pulls Athena’s legs up, showing off Athena’s apple bottom to the crowd, locking in a humiliating reverse schoolgirl pin! Athena is let go so Dolly can again reap havoc on her belly with devastating belly punches! Athena needs to pick it up if she has any chance at victory. Dolly smells blood in the water and can see that she has not only rocked Athena, but that Athena has fear in her eyes! Dolly spends the remainder of the match, brutalizing, pummeling, humiliating, and dominating Athena Law in one of Athena’s worst, most painful, and embarrassing losses! Scissor Holds, body scissors, head scissors, vicious hair pulling, punches, kicks, knees, eye gouges, back breakers, wedgies, wedgie slams, trampling, humiliating trash talk, sexy pins, leg hook pins, schoolgirl pins, spankings, and more! Dolly throws Athena outside the ring where she applies a sexy reverse hair bridge, slams Athena’s face into the ring posts, beats Athena’s face with more punches, punishes Athena with more belly punches, and sets the battered jobber on all fours to grind her face into the ring canvas! Athena is tossed back in to the ring where she is choked over the middle rope! The assault continues with more bully tactics, belly punches, hair pulling, pins, skull crushers, camel clutches, back breaker hair pull, sitting hair hangman, rope work, corner work, pedigrees, and soccer mom strangles! Dolly applies a crippling, crotch splitting hold on Athena as Athena writhes and begs her to stop! Dolly insists Athena verbally submit to her, to which Athena immediately complies, screaming “I give! I give!”. Dolly wants to make a statement and humiliate the so called tough girl even more, telling her to tap out. Athena frantically slams her hands against the canvas, tapping out, still whaling her verbal submission to Dolly! “I give I give!” Athena sobs! Finally Dolly lets her go as Athena lay defeated and completely out classed on the canvas. Dolly has to make a point, and lets Athena know she plans on adding a KO over Athena to her ever budding resume. Athena is ripped to her ass by her hair where Athena uses a head popping sleeper hold to send Athena to dream land. Athena is cross eyed and limp in Dolly’s control. The match is over, and Athena Law, just as Dolly had told her, got her “ASS, BEAT!”. Match, Dolly Prescott. 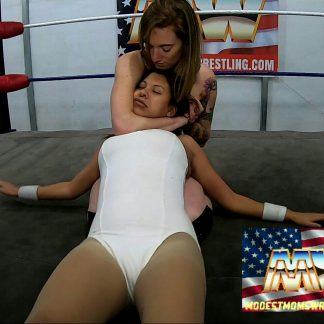