“Return of the Law!”

Athena Law goes toe to toe with Lucie Yang in this fast paced, back and forth, smash mouth boxing battle!  Athena is ready to climb the ranks again.  Once being the most feared woman in MMW, Athena is not happy with the push the new talent in receiving, and decides to remind the would of her aggressive style by taking out her aggression on Lucie Yang!  Prepared for a hard fight, Lucie had no idea the heat Athena was bringing today as she is utterly outclassed at ever turn.  Athena dominates Lucie against the ropes, in the corners, and center ring, pummeling the sexy woman with jabs, hooks, body shots, uppercuts, belly punches, and combos!  Lucie puts up a good fight, but is no match for the speed and technical skill of the former MMW champion.  Multiple knockdowns, tons of head snaps and more!  It’s all Athena in this sexy, one sided, jobber beatdown! 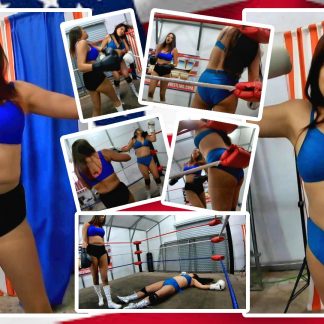