It’s a Jobber buffet as Tovah Nicks and Dolly Prescott team up to take on the hard-hitting tag duo of Alexandria Hamilton and ‘Athena Law!  Alex is thrilled to have ditched her sister Lizzy and teamed up with Athena.  The two have been destroying every team in their division and tonight is no different.  Straight from the bell it is all Hamilton/Law as Alexandria starts out with a stiff beatdown of Dolly, humiliating poor Dolly with a neck wrenching guillotine and wedgie!  Dolly quickly tags in Tovah, who’s fate is no different.  Alex takes quick, easy control and dominates Ms. Nicks, feeding her a painful beatdown filled with punches, kicks, stomps, slams, and submissions!  Some sexy double team action in the corner and Alex tags in Athena.  Athena has fun playing with Tovah, beating the thong clad jobber senseless before Dolly returns!  Alex and Athena take turns pummeling the team of Dolly and Tovah.  Humiliating the two jobbers with vicious hair pulling, corner work, rope work, double teaming, stunners, pedigrees, bow and arrow, boston crab, camel cluthes, low blows, and tons more!  A final double camel clutch ends the night for the two weaker women as they are forced to verbally submit.  What a beatdown!  Alex and Athena close the match with a sexy double leghook pin before striking a gorgeous victory pose over the two defeated women! 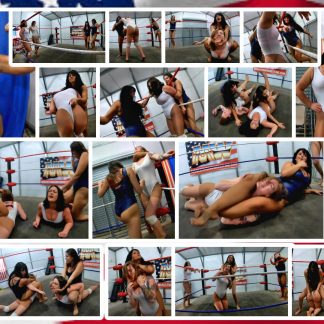