Athena is in the middle of the ring in her shiny, gold leotard, and is in the middle of talking about how she is going to beat Sugar’s ass. Athena is very confident, perhaps a bit too confident, as she is unaware Sugar is right behind her and can hear everything she is saying. As her rant draws to am end Athena notices Sugar behind her, but it is too late! Sugar slaps a head swelling sleeper hold on Athena, and in an instance Athena finds herself trapped in Sugar’s grips and fighting for her life! Her offense lasts only but moments before she succumbs to Sugars might and is laid out on the canvas. Sugar spends the duration of the match completely dominating Athena with various sexy scissor holds, and old fashioned bully wrestling dirty tactics! Hair pulling, trash talking, ass slapping, wedgies, jaw smashing uppercuts, hard deep belly punches send Athena’s thong clad apple bottom flying towards the MMW camera each time Sugar buries a strike in to Athena’s sexy, soft belly! Clutches, school girl pins, reverse school girl pins, slams, chokes, and skull crushers, all accompanied by Sugar’s devastating scissor holds! Head Scissor, reverse head scissor, side head scissor, body scissor, boston crab head scissor, and more! Sugar uses her patented humiliating ostrich head scissor to lock Athena in between her thick gorgeous thighs, while Athena’s gold thong is on full display as she writhes bottoms up in Sugar’s control! The assault continues until a final sleeper hold puts Athena out for the night! Athena is completely done! However, that doesn’t mean Sugar is! Sugar drags Athena’s limp, defeated body halfway out of the ring, when she applies yet another crippling scissor hold, jist to squeeze more pathetic moans, and please out of a completely embarrassed Athena! Sugar finally lets go and exits leaving pathetic Athena in her wake, holding her throat, and sobbing from the beating she just suffered at the hands of the MMW mega heel, Sugar! 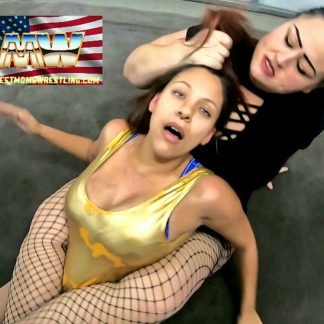