Alexandria finds a strangers panties, and confronts Athena, convinced that she is the owner of these mystery ladies underwear found in her boyfriends bedroom. Athena is full of denial but this does not stop Alex from feeding her a brutal beatdown, focusing on Athena’s wrestling bottoms, and exposing the weak girls panties over and over to add humiliation to the painful assault imposed on Athena’s sexy, soft body. Punches, kicks, knees, stomps, hair pulling, pedigree, facebuster, stunner, chokes, submission, and TONS of panty exposing, humiliating wedgies! Athena is beaten from pillar to ring post, smashed in the corners, and draped on the ropes as Alex pummels the alleged mistress into a twitching, sobbing, begging, pathetic, jobber! Alex ends the night by stuffing the mysterious panties in Athena’s mouth, giving the battered woman something to bite down on as Alex snaps the young woman’s neck. Putting an end to any future encounters between Athena, and Alexandria’s boyfriend. 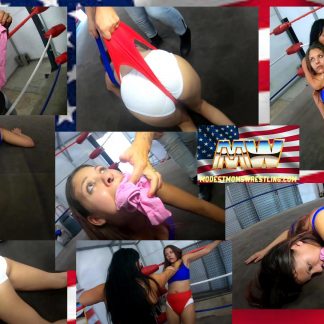