LuchaGirls CEO Jezabel Romo, heads north, to challenge MMW CEO, Alexandria Hamilton in a classic North Vs. South, Queen of Cali, Brawl! With both MMW girls, and Lucha girls cheering on their leaders, this fight is a hard fought back and forth with neither woman wanting to be humiliated in front of their students Jezabel has been very critical of Alexandria, having handily defeated her once prior in SoCal, she is not happy with another woman intruding on her space and trying to recruit her students. Alex has come leaps and bounds since her beat down from Jezabel, and is convinced she has what it takes to put the pro wrestler to sleep! From the opening bell, the two women give and take major punishment, exchanging blows, gut punches, crotch shots, and low blows! Both women take turns battering each other with hair pulls, slams, chokes, scissors, bends, twists and good ol, lady wrestling torment! Finally one woman proves she is Queen by KO’ing the other! Which woman will use the others, limp body as a footstool for their triumphant victory pose!? 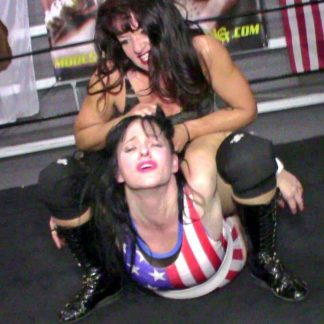