If ever their was a humiliating loss, of all people, highly feared and self proclaimed “bad girl” Athena Law, just suffered such an embarrassing beating.  Alex is a highly conservative, proud, Lady Wrestler. She can’t stand these little hussies prancing around, and wrestling in their bikinis. Today she plans on teaching unsuspecting Athena Law, a lesson in old school, smash mouth wrestling! Alex attacks Athena as she is making her way to the ring, grabbing her by the hair and slamming her pretty face in to the steel ring posts! That’s not the ring bell your hear, that’s the sound of Alex, slamming Athena’s head in to steel! Athena crumbles to the ground and Alex is quick to rip her right back up by her hair, using a two handed choke to lift Athena off her feet! Athena’s bare feet dangle as she goes cross eyed in Alexandria’s grip. Alex release Athena, but only long enough to throw her in to the ring. Athena hops to her feet and sends several strikes in to Alexandria’s jaw, stunning Alex as Athena bounces off the ropes to deliver a clothesline to Alex, but Alex is able to counter, lifting Athena with ease and slamming her down to the canvas with a ring shaking body slam! Athena Alex is in complete control and Athena has nowhere to go! Alex proceeds to dominate, beat down, humiliate, and utterly pummel Athena from pillar to ring post! Slams, strikes, submissions, hair pulling, humiliating wedgies, spanks, and SO much more! Alex brings out her steel garbage can full of toys to use on poor Athena. Alex uses nun chucks, cookie sheets, and a construction stapler to brutalize her pathetic jobber. Athena is beside herself with no defense to mount against dominant Alexandria. Alex tells Athena she is going to make her look like a dog, and proceeds to use Athena’s “slutty” makeup, to paint, and clown up, Athena’s tear streamed, sobbing face, adding insult to injury by painting “Loser” across Athena bare, soft, beaten belly. The assault continues with more submission holds, bully torment, and trash talk. Alexandria placing a bag of Athena’s head in a show of humiliation, locking of a breath taking bear hug, throttling Athena like a rag doll. After a barrage of punishment, Alex slaps a sexy leg hook pin on Athena’s defeated, limp body, scoring the 1, 2, 3, and picking up a rather decisive win over her arch enemy! Alex exits the ring and is discussing how fun, and easy it is to dominate Athena Law. Athena begins to stir in the ring. Bewildered, she makes her way to her feet on top of very wobbly legs. Unaware, and in a fog of what just happened, she sees Alex climbing back in to the ring. Athena extends her hand as a show of sportsmanship, but Alex has more sinister plans in mind. Alex takes Athena’s hand as if to shake it, and in a show of complete disregard for sportsmanship, takes a cheap shot and bitch slaps Athena across the face, damn near KO’ing Athena, and sending her plummeting to the canvas. Alex takes Athena’s back and locks in a crippling camel clutch, working Athena’s chest, ripping her face apart with a face peeling fish hook, and nearly scalping Athena with a vicious, brutal hair pull. Athena is overcome with pain ad begins to convulse. Alex slaps on a camel clutch for her sheer enjoyment. Alex laughs as Athena goes cross eyed and begins drooling uncontrollably. Athena is far past defeated, and is merely a statement made by Alex at this point. Alex releases Athena into a puddle of her own drool. Alex wants to commemorate this lovely occasion and decides to take a few selfies of Athena’s KO’d body. Match, Alexandria. 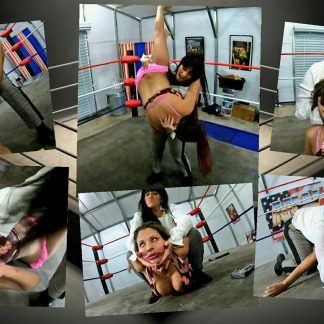