Athena Law LOVES taking the new girls to “Law School’  beating the ever living hell out of Alexandria Hamilton in her last “class”  Athena’s shows up the this session of law school wearing the very leotard of the woman she defeated in her last lesson!  Harper is very confident in her wrestling abilities, and has actually requested to face Athena, claiming she is not scared of the MMW bad girl.  The two lock up and immediately it’s apparent that Harper is well out of her league.  What a squash match!  Athena dominated Harper from the opening bell with strikes, submissions, chokes, corner work, rope work, and more!  Belly punches, face punches, hair pulling, face buster, back breaker, camel clutch, bearhug, headscissors, wedgies, neck stomps, head slams, stunner, and more!  Harper is no match for Athena!  Athena shows no mercy all the way up until the final agonizing KO!  Harper goes from competitor, to rug as Athena places her foot on the defeated woman for a highlight reel victory pose!  Match, Athena Law!  Class is now out of session. 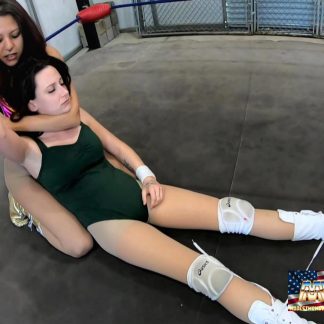