It’s time for an MMW Title Match!  With Athena Law injured, the MMW Title is up for grabs and Alexandria Hamilton is set to face Lora Cross in the first ever, MMW Ladder Match to crown the new MMW Champion!  Alex is a former champion and is still traumatized by her bloody loss to Jezabel Romo, she is determined to get her gold strap back and is ready to do whatever it takes to Lora Cross to walk out, the MMW Champion!  Lora would love nothing more than to return to Florida with MMW Gold, and is ready to take on Alex and do whatever is necessary to get her hand raised!  The girls enter, the bell rings, the ladies circle and lock-up and this match it on!  TONS of back-and-forth Pro-Style action as the two exchange slams, holds, and strikes, both looking for a clear shot to the ladder to get the MMW strap!  The battle rages on and finds itself outside the ring!  Alex is first to use the ladder, making Lora taste steel as she uses a handful of hair to bash Lora’s gorgeous face into the 8ft steel ladder!  The ladder has officially entered the picture and ladies use it outside to ring to slam, bash, climb and splash!  The ladder makes its way into the ring where the war continues!  Multiple climb attempts as the ladies fight on and under the ladder, using it to pummel each other’s body’s!  One lady climbs and the other tips her off.  One lady climbs and the other hits her off!  Give-and-take everywhere and neither lady wants to quit.  A final chokeslam from the top of the ladder after an all-out brawl at the top of the rungs leaves one woman flat on her back on the MMW canvas gazing far above at the superior woman getting the belt at the top of the ladder!  Which woman will walk out with MMW Gold?  Download to find out! 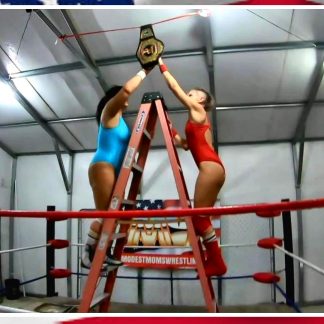