Allie Parker visits the MMW ring to take on MMW owner and America’s BEST Jobber, Alexandria Hamilton, the two make their entrances playing for the camera, each confident they will leave with the W! Allie clad in a coral one piece, Alex in a mint green one piece, each girl in pro gear, boots and pads, after a long, intense stare down, the two woman warriors lock up in the middle of the ring! Alex strikes first sending a big knee to Allie’s midsection, her assault continues cornering Allie for a corner beat down, strikes and belly punches. Allie is sent face first to all 4 turnbuckles before she is thrown down like a pair of dirty wrestling boots! Alex is in fire, its clear she’s ready to defend her ring, and let Allie know that she is a LONG way from Vegas! The two girls battle back and forth, exchanging pro moves, stunner, face busters, camel clutches, submissions, corner beat downs, snap mares! Hair is flying and neither girl is ready to give! Alex gets Allie in a tight sleeper! It looks like Alex might actually pull off an upset, as she has Allie locked in her sleeper! Allie paws and slaps at Alex’s arm as she begins to fade, what Alex does not know, is Athena is lurking behind her, and the moment Allie goes out, Athena slaps a sleeper on Alex. Alex struggles, but before she is KO’d , Athena rips her to her feet by her hair and send her to the corner, sending strike after strike across her jaw, Gut punch after gut punch sending Alex’s lovely round bottom flying towards the camera! Alex slumps in the corner to a sitting position, as Athena rips Allie to her feet by the hair, setting her in the same corner, laying down another beat down on Allie, with Alex sitting behind her cornered between the turnbuckles and Allie, Athena sends big deep punches to Allie’s stomach, folding her with each strike, and send Allies shapely booty flying in to Alex’s face. The two jobbers are grabbed by the hair and dragged to the center of the ring for DDT’S flattening them face first to the canvas. Athena continues to humiliate the women, stripling them of their wrestling boots, and putting them each in a camel clutch. Each girl kicks and begs for Athena’s mercy, until she finally has had enough rag dolling the two jobbers, she pulls the two beaten women on top of each other for a superior, victory pose, as they lie defeated beneath her feet. Athena exits leaving Allie and Alex behind for the MMW cleaning crew! 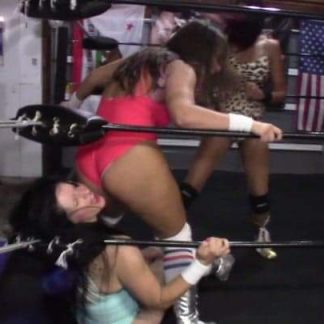