“Ignorance of the Law!”

Two hot chicks with thick round bottoms enter the ring to face one woman. Alex and Dana have both been beaten senseless by the dreaded Athena Law, and today, the barefoot ladies dressed in their lovely leotards, are joining forces to seek their revenge against this seemingly unbeatable woman. Enter Athena Law, clad in boots and her FAVORITE jobber smashing gear, her bra and panties! Enter a thorough beating of these two pathetic jobbers. Athena wastes no time establishing who is in control as she sends hard, low blow soccer kicks straight to each girls crotch! Dropping both Alex and Dana to their knees! This match is over before it starts, as Athena mangles the two jobbers around the ring! Ripping and tearing them back to their feet, and every which way, to endure more painful torment! Vicious Hair pulling, sleeper holds, hammer locks, face punching, gut punching, camel clutches, ass slaps, wedgies, head scissors, smothers, low blows, and a ton more jobber smashing moves, make a painful night for dynamite Dana and Alexandria, as the two women are used as mops to wipe the ring clean with! When Athena is finally done she she takes turns giving each lady an ass to the roof leg hook pin! Athena then piles her jobbers center ring, making the perfect stool for her victory pose!  Match, Athena Law! 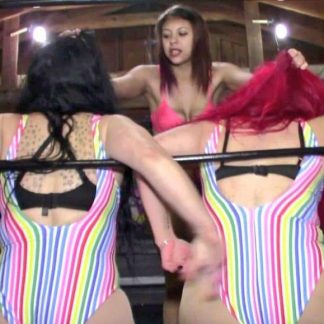