Alexandria is in sunny Southern California! And so is ultra sexy Ashley Graham! AND so is the LEGENDARY STJ wrestling ring! Wait, why would a sweetheart like Alexandria and a nice gal like Ashley wanna even fight each other? Who knows? I say its the leotards! Its doggy day care owner vs. soccer mom! Don the lycra ladies! And get in the ring! The two lock up the middle of the ring. A brief struggle to a dead wash, and they break up. Circling each other, sizing one another up. Some catty remarks are exchanged and the girls lock into a test of strength! Its not but a second before Ashley’s bad side kicks in, sending a cheap shot headbutt to Alexandria’s mid section! Followed up by a crushing low blow! Agony covers Alexandria’s face as she holds her crotch. Ashley rises to her feet sending a straight right cross to Alexandria’s chin, turning her knees to jelly and sending her flat to her back! Alexandria is ripped to her feet by her hair for another granite fist punch to the jaw! Again, flattening the MMW Champion. Ashley gives Alex no time to breathe, again yanking her up by her hair, not concerned with rules, and tosses Americas Best Jobber into the center of the ropes, unleashing several belly Strikes hard and deep into Alexandria’s gut! Ashley tosses Alex across the ring springing her off the ropes directly in to a hard overhead right! POW! Again connecting with Alexandria’s tiring jaw, spinning the jobber in to perfect position for Ashley to bounce off the ropes and slam Americas Best Jobber face first flat to the canvas with a face flattening bulldog! Alex is hurt, she tries to make her way to her feet but Ashley hops on top of her like a pony! Mocking the MMW Champ, spanking her ass riding Alexandria all the way to the corner where a snap mare sends Alex across the STJ ring! Alex is feeling as blue as Eds canvas, as Ashley yanks her to her feet by the hair, slamming her face first into the top corner turnbuckle! Alexandria is flipped around for a series of right hooks straight across the jaw! Followed by hard deep belly punches! Ashley is verbally mocking the young soccer mom now. Using her hair to drag her to the middle of the ring for a devastating, ring shaking, face buster! Alex writhes on the canvas as Ashley locks her neck with her ankles yanking up on Alexandria’s arms in an agonizing reverse surfboard! Its bottoms up as Americas Best Jobber is face to the mat ass in the air yelling in pain! A horrified Alexandria has nowhere to go! Ashley takes notice of her opponents round ass saying hello to the Socal sun! Ashley cant control herself! Dropping Alexandria’s arms, keeping her head locked face down she yanks on her jobbers leotards! Pulling it deep in to her full lovely bottom! You can hear the fibers taring within Alexandria’s tight ring attire! Alex pleads, Ashley lets her go, but only to have a drum session on Alexandria’s ass! Spanking the soccer mom, verbally mocking the weaker wrestler. Alex is overwhelmed and Ashley uses a one handed strangle to pin the MMW champ to the mat! Verbally assaulting her while Alex gags and gasps for air! Ashley rips her jobber to her feet by the hair and throat. Using her leotard as leverage, pulling it further into Alexandria’s booty she lifts her for a hard choke slam! Ashley could easily pin Alex here, but wants Alex herself to tell the world she gives up! With Alexandria face down, Ashley places both of her knees on the MMW champs back. Horrifically yanking back on the jobbers hair with no, absolutely no regard for safety. The look on Alexandria’s face submits for her, as do her wails and moans and groans! You wonder what will snap first? Alexandria’s back? Or, her neck? Or is Ashley going to scalp her in the middle of the ring with that excruciating hair pull? Alex finally cries out “I give!” and its match, Ashley Graham! What would a beating be without a victory pose? And this scene ends with Alex under Ashley’s wrestling boot! 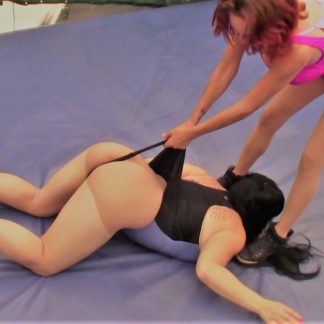