Harper Rose makes yet another big statement in the MMW ring at the expense of once-feared, Athena Law! It’s payback time for Harper, having developed quite the feud with Athena over who is the toughest chick in MMW. Harper is set on not only defeating Athena, also crushing her spirit, her ego, and humiliating her! This is a total squash match of Athena Law, as Harper destroys Athena with multiple strikes, submissions, slams, and chokes, all the while paying attention to Athena’s tight, white, sexy bottoms! Wedgie’ing Athena at every turn, Athena is completely overwhelmed and can mount no defense to the onslaught of pain Harper imposes on her! Leg locks, scissor holds, sleeper holds, rope work, corner work, facebusters, stunners, pedigrees, and more! All leading up to the final, ring shaking, devastating KO! Leaving Athena sprawled flat on her back on the MMW canvas. Match, Athena Law! 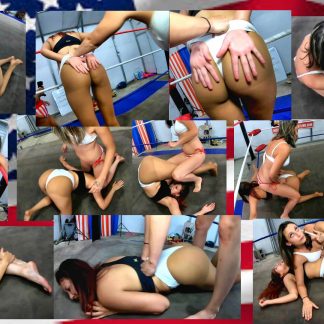