Lizzy Hamilton isn’t quite as nice as her younger sister. Alexandria plays by the rules, loves authority, and is always a good sport. Lizzy is not a good sport, she hates to lose, and enjoys making her opponents suck her feet from time to time. Even her own sister! Enter Athena Law, clad in jobber white from head to toe, ready to take on Lizzy Hamilton, dressed in heel black, and hungry for a jobber! After an intense stare down the two lock up, Lizzy immediately takes control, not wanting to waste any foot claw time! The California Queen uses Irish whips coupled with clotheslines followed by a BIG leg drop to wear down the MMW bad girl. Lizzy takes no mercy, constantly ripping Athena up by her long hair, hurting Athena, causing her to cry in pain, some BIG corner splashes followed by face smashes to the turnbuckles rattle Athena! Unaware she is being held by her hair, a woozy Athena is slumped over the top rope while Lizzy unleashes a flurry of jabs to Athena’s breasts and stomach. Lizzy gets back in the ring and wastes no time tossing Athena back and forth from corner to corner with devastating hair mares! Athena is walked like a dog on all 4s, using her hair as a leash, Lizzy pulls Athena to the center of the ring. A series of elbows and the Maj is opened up, but this doesn’t slow down Lizzy! Like a pit bull, the sight of Athena’s blood exacerbates Lizzy’s thirst for complete domination. Locking Athena in a wrist lock, Lizzy continuously pulls Athena to her feet by the hair, striking her over and over with heavy backhands! Bloodying the Veterans face more! All the while never giving up the wrist lock. Athena is completely destroyed, reduced to a bloody pile of white clad jobber. Lizzy is ready to feed Athena her gorgeous foot! Why not scoop the Maj. up, and parade her bloody body around before body slamming the lifeless woman, slamming her against the canvas shaking the MMW ring and Athena’s ego! Athena is completely defenseless as Lizzy commands her to untie her boot with her teeth! Given the beating she just took, Athena is in no shape or place to deny the California Queen her wishes! Athena bends down on her hands and knees, pointing her perky white leotard clad booty to the sky, untying her victors boots with her teeth just as commanded! Its time for the California Queens trademark move, the California Smile! Dragging Athena by the hair like a bag of gravel, Lizzy demands Athena bite the bottom turnbuckle. A sobbing Athena bites the turnbuckle as commanded, and Lizzy wastes no time, stomping the back of the Majors head with force! Giving her a permasmile she wont soon forget. Athena is sat in the corner and forced to suck Lizzy’s victorious feet. Suck the Queens feet Athena! Lizzy smirks and smiles while a literally sobbing Athena has a MOUTHFUL of Ms. Hamilton’s foot. Deeper and deeper, Athena’s cries are muffled by wet slurred grunts as Lizzy stuffs the majors face full of her royal foot! Athena taps frantically as the bell rings over and over, but Lizzy continues to humiliate the woman! Force feeding her even though she is plenty full! No need to pin, Lizzy tosses her bloody limp opponent outside the ring! As the ref raises Lizzy’s hand over a completely destroyed Athena law! 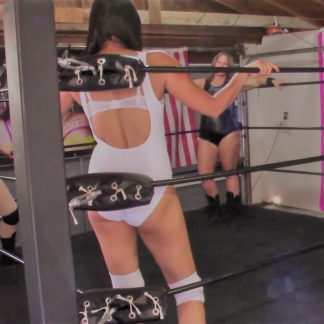