Samantha Grace is visiting the MMW dojo!  And she is coming off a BIG win against one of MMW’s top talent’s, and most well rounded fighters, Awesome Laney Dawson!  Samantha has only been in town a bit, and so far it’s SoCal 1, and NorCal 0!  Now it’s time for MMW CEO herself, America’s BEST Jobber, Alexandria Hamilton to take to the ring, to defend her dojo!  Oh poor Samantha.   Alex shows up to fight, and fight she does!  Outclassing Samantha at every turn!  Out striking her, over powering her, and plane ol’ out wrestling her.  Huge Belly punches, face mangling punches, hair pulling, surfboards, leg locks, chokes, slams, sleepers, are just a few of the moves Alex uses to completely dominate Samantha Grace!  Finally after beating the beach jobber senseless, Alex uses ropes to tie the woman to the rings, and torment her poor crotch!  Using the ropes as a system to spread Samantha’s legs, about splitting the poor woman in half like a wishbone!  Samantha is let go and Alex binds her hands like a puppet, leaving Samantha’s arms suspended in the air, Alex slaps on an air tight sleeper, as the SoCal jobber fades, it’s Alex that walks out of this contest with the “W”!  SoCal 1, NorCal 1, next up, Sugar! 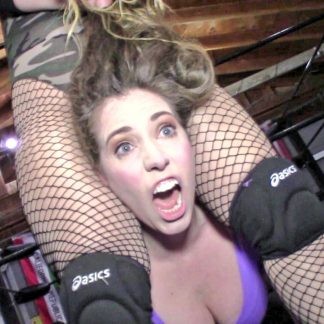