It is the debut of Glamorous Shelly, and she has requested a fight with MMW CEO, Alexandria Hamilton!  Alex has heard that Glamorous Shelly can fly off the handle at any moment, but she is convinced that the two will have a very fair, and uneventful contest, and wishes Shelly the best of luck.  Shelly enters with her assistant, Vixey.  Vixey carries Shelly’s mirror for her so Shelly can admire herself before entering the ring.  Alex is bewildered at Shelly’s narcissism but is still confident that she will get the win for the MMW dojo.  The match begins and immediately Shelly takes control with a painful standing guillotine before sending Alex plummeting to the canvas with a horrific, stiff, forearm to the back!  Shelly is not concerned with her writhing opponent’s pain as she retreats to the corner where Vixey fans her and towels her off.  The remainder see’s Shelly utterly dominating Alex in the most humiliating fashion seen thus far in the MMW Ring!  Shelly uses her mirror to observe herself putting Alex in various holds, ordering Vixey to take pictures of her as she destroys Alex.  Alex is made into an all-out spectacle as she is used for pose-after-pose in Shelly’s mirror.  Shelly becomes enraged when Alexandria’s sweat gets on her satin gloves and orders Vixey to fetch her, her lace gloves.  Vixey does as she is told and put’s Shelly’s gloves on for her.  Shelly proceeds to beat Alex senseless, finally becoming a bit fatigued and in need of a break, she orders Vixey to continue the beatdown so she can rest.  Vixey again does as she is told and proceeds to continue Alexandria’s punishment, putting America’s BEST Jobber in the corner for a quick boot party, stomping the PAWG mercilessly into the turnbuckles and canvas!  Shelly is ready to continue her time with Alex.  The pain continues.  Shelly has Alexandria in the corner where a barrage of face punches, break Alexandria’s nose causing her to bleed ultimately getting her blood on Shelly’s lace gloves, sending the firey hot Latina into another frantic rage.  Vixey removes the soiled gloves and Shelly continues her ruthless beating of Alexandria’s already bloodied face!  Shelly is in need of a drink and orders Vixey to pour her, her vodka.  Vixey does as she is told and pours Shelly her drink.  Shelly holds a moaning, battered Alex by her hair.  Alex is on her knees and in a punch-drunk daze.  Shelly finishes her drink and smashes the glass over Alexandria’s head.  Alex collapses to the Canvas, hoping the beating has come to an end, but Glamorous Shelly loves putting on a show, and being the center of attention. She can’t help but humiliate her already defeated opponent even more.  She stands above Alex and goes on to pour the remainder of the bottle of Vodka on Alexandria’s bloody face.  Alex gasps and gags as Shelly continues to giggle and Vodkaboard the helpless woman.  Shelly orders Vixey to bring Alex to her knees and Vixey does as she is told, ripping Alexandria’s limp bod to her knees by a gob of her thick, dark hair.  Shelly gives a final farewell to Alexandria before smashing the glass Vodka bottle over her head, knocking out the jobber for good.  A double leg-hook pin gets Glamorous Shelly the 3-count and win in her debut match!  Shelly yanks Alex to her knees again by her hair for a final look at herself victory posing holeding her battered, bloodied, and defeated jobber!  Shelly gazes at herself displaying her bloody trophy before leaving a KO’d Alex ass up in front of the mirror and exiting the MMW dojo.  Match, Glamorous Shelly!  What a debut! 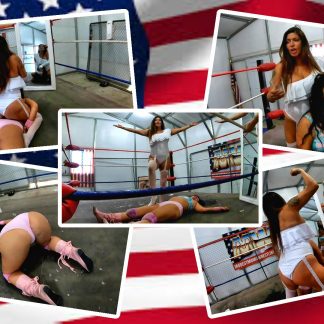