The MMW Tag Team Titles are on the line, but not against another tag team, no, today, America’s BEST Jobber, Alexandria Hamilton, and MMW Boxing Champion, Athena Law, are teaming up to put the MMW tag belts,name, and pride on the line, against a single challenger, Gia Giant!  Who has challenged not MMW champion herself, Alexandria Hamilton, but instead, in the cockiest of challenges, Gia called out the tag team, simply to showcase her might, and embarrass the MMW name.  An unlikely team, Alex and her sister Lizzy are the reigning tag team champions, however in Lizzy’s absence, Athena Law agreed to fill her spot, in order to defend the MMW name.  Athena and Alex enter first, holding the glittery gold and pink MMW tag belts!  These ladies look stunning in their long golden cloaks, covering their matching tag team attire, white leotards, white knee pads, white wrist bands, and white boots!  The girls appear confident and in good spirits, and ready to defend their belts!  Enter Gia Giant!  An awesome presence!  clad in a low cut orange leotard, and shiny wrestling boots, Gia enters and flexes her arm for the camera, as her opponents look on, Gia enters the ring, towering over the other two women!  The lady’s shoot daggers at each other from across the ring.  Alex exits, and it is Athena Law who’s is going to lock up first.  The two women lock up, and Athena is immediately overpowered into the corner, where Gia sends a massive right cross shattering Athena’s jaw, and that is the fight, Athena stunned and amazed at Gia’s one-hit power, is helpless as Gia mercilessly destroys her with easy, stomping and slamming away at poor Athena, setting her down and purposely pointing her ass at Alexandria, as she wedgies Athena’s leotard deep in to her perky bottom, Alex can only look on, horrified that she is next, Gia absolutely throttles Athena with chokes, locks, and slams, until literally throwing her out the ring like garbage, only to reach over and clinch a gob of Alexandria’s hair, ripping her in to the ring, for the beginning of her beating!  Alex is no match for Gia, from the get go, embarrassingly rag dolled, Alex, an Amazon in her own right, dwarfed and absolutely tossed around like a toy, as Gia inflicts merciless punishment on America’s BEST Jobber.  Gia has fun playing with Alex, but grows bored, and pulls Athena in to join the fun, proceeding to torment and senselessly beat the two women at the same time.  Alex and Athena cry out in pain, horror, and humiliating, as Gian lay them side by side for an agonizing hair pull display, a double head scissor, double wedgie, double skull crushing, double sleepers, Gia, places each lady face first in the corner, sitting on their back for a clever, horrific, back breaking, modified camel clutch!  Gia spends the match using the two woman as fodder, showing off her might, her strength, and superior power, reducing them to sobbing, wedgied, beaten and humiliated wanna be wrestlers.  Holding both women together by one handful of hair, she demands they kiss her boots, Athena refuses, however a sobbing Alex doesn’t want to get hit anymore, and agrees to kiss Gia’s feet, Gia lets her go and Alex bends down, with her white clad ass in the air and begins kissing Gia’s boots, Athena tries so hard, to save face, but the Giant is too much, and Athena has no choice but to do what Gia commands of her, bowing in front of the giant and kissing her boots!  Gia stands triumphantly over the two pathetic women, looking down at their asses pointing straight in the air at her command, the sounds of them making out with her boots echo in the MMW fight room, along with their helpless whimpers and surrendering cries.  Gia rips both women to their bottoms by the hair for a final  double sleeper!  Eyes are rolling as Athena and Alex begin to fade in the Giant’s grasp, the two inferior women fall at the Gia’s side, as she uses their defeated bodies as a foot stool, flexing above the two women she just destroyed all by herself.  This match, and the MMW tag titles, belong to Gia the Giant! 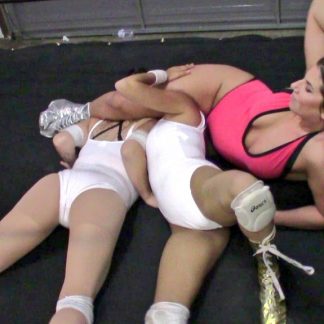