View cart ““Cry Baby Athena!”” has been added to your cart.

Americas Best Jobber isn’t in the best of moods. She has had a long losing streak that’s getting old, Athena Law is no stranger to Alexandria, having brutalized the sexy MMW champ a number of times. Athena enters the ring in leisure clothing thinking its a workout session, booty shorts hug Athena’s bottom and her tied half shirt make it clear she didn’t come to compete. Athena arrives to find Alexandria clad in black from head to toe, and in a BAD mood, but, Athena Law doesn’t back down from a fight! She attempts to leave the ring to “put her gear on” but Alex is NOT having it! Stopping the gorgeous mega heel by a handful of hair, and giving Athena two, crotch splitting atomic drops, smashing Athena’s crotch onto her knee! Athena wails in pain, and this is only the beginning of Alexandria’s day. Move after Move, Alexandria bends and stretches poor Athena, reducing her to a crying mess! Alexandria is not sympathetic to Athena’s cries to stop, as she continuously degrades the so called bad girl, calling her a bitch and a slut, over and over! Completely disgusted with Athena’s half shirt and cheeky booty shorts, Alexandria makes it a point to let Athena know shes a slut, and nothing more. A surfboard hair pull puts Athena’s neck to the test as Alexandria plays tug of war with Athena’s long hair, trying to touch her heels to the back of the head! A reverse Romero makes the tears flow worse as Athena’s begging is amplified! Alexandria grabs a HEAVY thick chain, and proceeds to hush Athena by taking her breath from her. Athena’s cries turn to gasps, but Alexandria has plenty of air to continue her verbal assault! Bitch! Slut! Whore! Next up, foot torture. A hammerlock locks Athena’s legs while Alexandria takes her time bending and twisting Athena’s gorgeous toes! One would think this match was about snapping Athena’s back in half, but the main theme is crotch abuse! Throughout Athena’s beating Alexandria pays special attention to destroying Athena’s crotch! Stomp after stomp, after stomp, after stomp! When you think Alexandria is done, she drapes a lifeless Athena over the ropes, grabbing a nightstick and placing Athena’s round booty in the air, Alexandria spreads Athena’s legs, and beats the hell out of her crotch! Blow after blow! Alexandria uses her nightstick to destroy Athena! Alexandria places her foot on Athena’s neck, and lets her know that things are gonna change! The MMW Champ exits, and we are left with a sobbing Athena. So sorry Athena, there’s always next time! 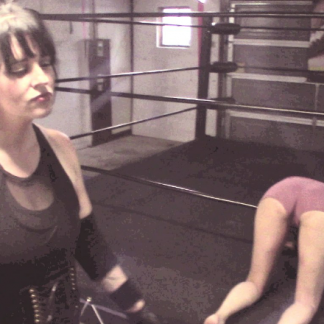