Ashley Graham shows up to the MMW ring wearing “Hit the Mat” Shirt This immediately sends Alex into a rage as she is scheduled to box owner Darrius later in the summer. Both Darrius amd Alex have exchanged words and tensions are high! So Ashley showing up in this shirt is pure disrespect, and Ashley knows it. Ashley tells Alex that Darrius has sent her to get a new banner pic for his popular website. Alex immediately challenge9s Ashley to a classic North Vs. South match! And we have a lady wrestling match! Ashley in heel black leotard with matching boots, pads, and accessories. Alex sporting a BOOTYFUL shiny, gold, thong leotard along with gold boots. The two women lock up and Alex immediately gets the upper hand with a series of bellt punches, head slams and corner work. Ashley goes down and Alex mocks her and Darrius. Ashley hears the insults and pops up to her feet, rushing Alex into the corner, Ashley begins beating and pummeling the Country girl with a merciless, SoCal L.A. beatdown. Alex is overwhelmed as her tiny opponent beats her silly with punches and kicks! HUGE belly punches that send Alexandria’s thick, round, thong clad bottom towards the camera! Alex is thrown down and choked, stomped, Foot choke, camel clutch, boston crab, eye gouging, reverse headscissored, ripped up and down by her hair, matchbook holds, slams, rope work, corner work, and Tons more as Ashley Graham beats down Alex even worse than their first meeting in L.A. Various submissions and holds lead to a final sleeperhold. A battered and limp Alex is pulled to her ass by the hair and choked with the HTM shirt turning the gorgeous Alex into a beet red, twitching, cross eyed mess! A KO’d Alex is rolled over and positioned face down, ass in the air, as Ashley places the HTM shirt over Alexandria’s lovely apple bottom. Ashley proceeds to take several pics of Alex in different ass in the air positions sporting the HTM shirt. This must be the new, humiliating banner Darrius was talking about. Ashley sends all the pics to darrius and we fade out with Darrius receiving the humiliating pictures. And what a reaction he has! 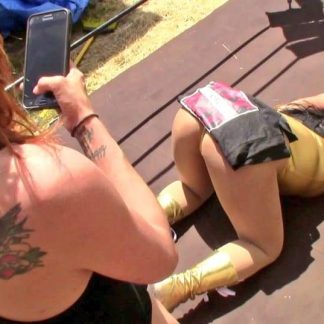