DUE TO THE LENGTH OF THIS CLIP IT EXCEEDS THE FILE SIZE LIMIT AND IS A 2 PART CLIP!  DESCRIPTION IS OF THE CLIP IN IT’S ENTIRETY!

Lizzy Hamilton is a Champion.  Quite literally.  She has destroyed every big name in her division, and won every ounce of gold in the women’s boxing circuit.  Alexandria is Lizzy’s sister.  An up and coming talent herself, Alexandria feels she has been reduced to Lizzy’s belt rack.  Only there to carry her gold, work her corner, raise her hand, book her matches, and answer her calls.  Alexandria is convinced Lizzy is losing focus.  Meanwhile there is Sarah Brooke.  Ruthless, a bruiser.  Sarah has torn through 2 divisions and laid out woman after woman.  Alexandria is aware of Sarah, and repeatedly tries to warn Lizzy that she needs to take Sarah seriously.  Lizzy dismisses Alex’s concerns as she continues to focus on fame, money, tv appearances, sponsorships and endorsements.  Sarah has worked her way to the top, twice calling out Lizzy after defeating both Sugar, and Platinum Fury.  Stopping both women in the 1st round.  Finally Lizzy agrees to fight Sarah and the match of the century is set!  Lizzy is getting ready in her locker room while Alex still tries to warn her of Sarah’s skill, and punching power.  Lizzy again blows off Alex, referring to Sarah as a mere “catfighter” who has been handed easy opponents.  Lizzy instructs Alex to get her belts, and the two head for the ring.  Lizzy enters to roars of cheers as she soaks up every bit attention, playing to the crowd as she sees this as the most important task of the night.  Sarah enters to waves of boos but remains stone cold in expression as she climbs through the ropes.  An intense staredown takes place, the bell rings, and the match is on.  The ladies circle eachother, sizing one another up.  Lizzy is all smiles as she taunts Sarah, literally daring her to hit her.  Sarah remains focused, unwilling to take the bait.  Lizzy reels back for a big shot, but Sarah dodges.  Lizzy throws more punches to no avail as Sarah uses her head movement to avoid each strike.  In an instance Sarah counters once again, and strikes, sending a horrific, stiff right jab to the center of Lizzy’s face, busting the California Queen open and sending her flying to her corner.  Sarah wastes no time as she swarms Lizzy, beating the poor blonde’s head around like a speed bag.  Lizzy has no defense as she tries to keep her hands up but continues to eat shot after shot.  The bell rings and the round is over.  Sarah laughs at Lizzy and makes her way back to her corner unscathed.  Lizzy remains in her corner.  Busted open, swollen, cross eyed, and disoriented, in a state of shock.  Alex tells Lizzy “I told you!  I told you!”  Alex let’s Lizzy know that if the match continues like this, she will have to throw in the towel.  Lizzy musters up enough sense to tell Alex no, still convinced she can defeat Sarah.  The bell rings and the fight is back on.  Sarah uses her foot movement, cutting angles and landing big blows.  Lizzy makes failed attempts at swings but continues to be fed counter punches and flurries.  It is all Sarah, as she controls Lizzy, giving her no space to breathe, beating her senseless with jabs, hooks, uppercuts, body shots and combos.  Lizzy is out on her feet as the crowd begins to boo and jeer Sarah at the sight of their Champion being pummeled before them.  Lizzy’s arms drop, and before Alex can throw in the towel Sarah throws a devastating uppercut into Lizzy’s jaw, dropping the Champion for 10 count!  Alex is beside herself as she sees her sister lay at Sarah’s feet.  Then, in the ultimate show of disrespect, Sarah strips Lizzy of her competition sash and throws it at Alexandria.  If this is not enough, when presented Lizzy’s championship belt Sarah sets her foot on Lizzy and rips the emblem from the belt before tearing the belt itself in half!   Alex is beyond down.  Her sister is in the hospital, Sarah is the champion.  Things couldn’t be worse, until Lizzy calls Alex from the hospital.  Lizzy informs Alex she has suffered permanent brain damage from Sarah’s punches, and will no longer be able to compete.  Alex has no choice but to avenge her sister.  A sexy montage of both Sarah and Alex training, boxing new opponents, and preparing for their inevitable clash.  Finally the match is set.  It is Fight Night!  We find Alex in her locker room in her bra and panties as she begins to gear up for her match with Sarah.  The two women enter the ring to cheers and boos.  An intense staredown takes place, the bell rings, and the match is on!  Who will take the victory and claim the gold?  Will Sarah continue on her path of Hamilton destruction?  Or will Alexandria avenge her sister, take the gold, and get the respect she feels she has long deserved?  Download to find out! 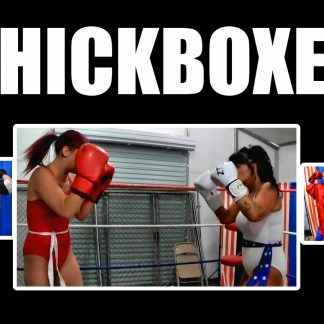