The only thing worse than watching your sister get the shit kicked out of her, is when she is suppose to be beating up the girl that kicked the shit out of you! Athena Law shows why they call her “The Hamilton Slayer!” mercilessly destroying the self proclaimed “California Queen” right before Alexandria’s eyes! Athena launches an assault of face and body strikes! breast and gut punches all while dragging the blonde half of the Hamilton’s around by her golden hair! A barrage of knees bloody Lizzy’s pretty face, dozens of uppercuts to her nose is gonna make it hard for Alexandria to recognize her big sister. However, Alexandria is forced to watch as any hopes of a Hamilton victory fade away! Tons of stomps and a bone snapping arm bar set Lizzy up to be plowed face first through a table. Game, Athena law, Athena 2, Hamilton’s 0. 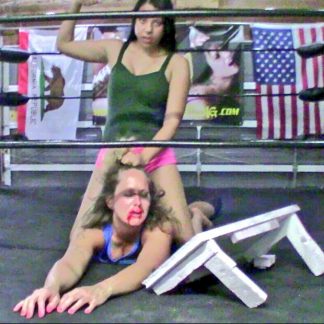