Megan Jones finally gets her long awaited rematch with Athena Law in this super sexy, one sided Jobber smashing beatdown!  Megan gave Athena a run for her money in their previous bout, going blow for blow and move for move with the MMW badgirl before ultimately succumbing the former Champion.  Today, Megan is confident she can even the score with Athena, however her dreams are swiftly dashed when Athena pummels the gorgeous brunette from bell to bell, and pillar to ringpost.  This time it is all Athena who destroys Megan with strikes, submissions, and good old fashioned grind house wrestling.  Headlocks, camel clutch, pedigree, stunner, hair pulling, sleeperholds, low blows, rope and corner work, and more!  Megan has no answer for Athena’s assault as she eats every blow and move Athena dishes out.  Finally, Athena grows bored of dominating her jobber and lays out Megan with a final submission giving herself the W and a 2-0 record against the dangerous Megan Jones. 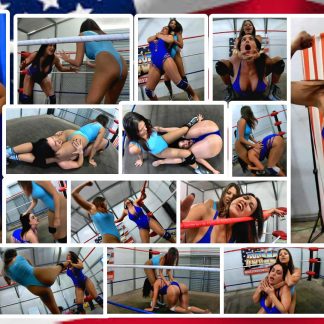