FINALLY, what MMW fans have been waiting for, and requesting incessantly! Sugar! In Boxing Gloves! However MMW Boxing Champion, Athena Law, is not convinced the Mega Heel can keep up with her lightning fast hands!Sugar is a Wrestler. And well known by all women who have stepped foot in the MMW Dojo. Sugar has brutalized woman after woman, opponent after opponent! A KO Queen! And a master of making girls squeal out their submission! Sugar has thrashed Athena Law on several occasions, but it is well known that Athena’s power lies in her Boxing. Knowing this, Athena is comfortable gloving up tp throw hands with Sugar. What a terrible mistake. “Beat the Spit Out of Her!” 3! Sugar makes a POWERFUL statement in her MMW Boxing debut!  Absoloutely PULVERIZING a cocky, sexy pink Boxing Trunk clad, Athena Law. Whats to say? Jabs, Hooks, Uppercuts! Belly Punching! Head Snaps! Brain Mangling Combos! The power, the raw power in Sugar’s punches are jaw dropping, (and smashing) as she uses Athena’s head as a speed bag! Athena is completely overwhelmed, outclassed, out-boxed, and just plane beaten. Hair is flying, several knockdowns! Knocking the spit out of an ego crushed Athena, over and over! Athena swollen and spraying every which way Sugar knocks her head. There is no stopping Sugar! Alex steps in briefly to try to stop the fight. However, a woozy, punch silly, cross eyed Athena refuses. Sugar throws Athena’s limp body to the corner to use her as a heavy bag. Athena in a punch induced catatonic state. Alex again hops onto the ring apron and throws in the towel to stop the merciless beating her friend is taking. Sugar is having none of it! Knocking Alex herself out, with one massive right hook! Alex is KO’d, face down on the ring apron. Sugar sends more hard, deep, massive belly punches into Athena’s gut. Lifting the 115lb fighter off of the ground! A final three punch combo ends this “Contest”. A limp Alex is dragged into the ring by her hair like a cave woman, and forced to count her friend out. Match, Sugar! And WHAT a Boxing debut it was! Look out ladies! There’s a new girl in town that’s throwing some bricks! 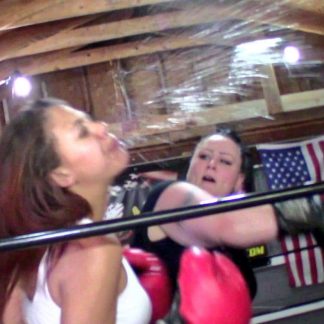