It’s time for a ladies boxing match!  And it’s happening in the MMW ring!  Awesome Laney Dawson, is gloved up  and ready for her first throw down!  Her opponent, the Hawaiian phenom, Tsunami, who is fresh off of a hot win in the wrestling ring, absolutely brutalizing Alexandria Hamilton in the video “Handled 2”.  And, more importantly, Tsunami recently knocked out MMW boxing champion, Athena Law, in a non title bout, in the video “Athena’s Intervention”.   Word is, if Tsunami can defeat the up and coming Laney Dawson, then she will be granted not only a shot at Athena’s boxing title, but also a shot at the coveted MMW Wrestling Championship, meaning Its very probable, that Tsunami could hold both MMW titles!  Easily making her the most feared woman in fantasy female combat today!  But first, she has to get through the blonde amazon,  Awesome Laney Dawson, who herself is fresh off 2 bit wins.  One against Alex in a non title bout, in the steaming hot squash match, “Heel before me!”.  And the other being her biggest win to date, handily defeating world famous female fighter, Megan Jones, literally beating the pants off of Megan, and making her fight in only her bra and panties, in the video “Squashed by the Rookie”.  Now she is ready to glove up and prove shes more than just a wrestler, but has dangerous hands too.  And Laney doesn’t want an easy task, she called out Tsunami, right off the bat, and,  here we are!  Whats to say?  Wanna see a blonde get the living hell beaten out of her?  Then watch Laney box Tsunami, as Tsunami embarrasses Laney, making a fool of the amazon, peppering and lumping up her gorgeous face with head snapping jabs, hooks, crosses and uppercuts!  Tsunami isn’t going to forget Laney’s lovely belly!  As she pins the Awesome one against the ropes for a belly beating.  Laney should have worn more than those bootyful shorts and sports bra, because her bare tummy is exposed, and Tsunami is punishing it in dominating fashion.  Laney attempts to engage, but is out struck at every exchange.  Her blonde hair is flying with each nose smashing, jaw breaking strike.  Over and over Laney eats canvas.  But bless her heart, she keeps getting up, only to be force fed more of a humiliating beating.  This is not Awesome!  This is not how Laney pictured this night!  As Tsunami continues her assault on poor Laney, battering the blonde from corner to corner!  Jab fests! hooks! cheap shots!  Laney is beaten silly until Tsunami delivers her final blow!  POW!…Tiiimberrr !!…Laney crashes face first to the mat like a bag of hammers, and Tsunami easily gets the 10 count! Winner, Tsunami!  This is usually where Tsunami exits.  However, surprisingly, and, out of character, she straddles Laney’s dazed body, and beats the blondes face back and forth! Laney lay helpless and punch silly, bewildered, and too jarred to think straight and defend herself, as she stares glassy eyed at the ceiling, while Tsunami knocks her head back and forth like a speed bag!  Perhaps this is Tsunami’s way of saying its her turn to hold the gold!  Winner by KO, Tsunami! 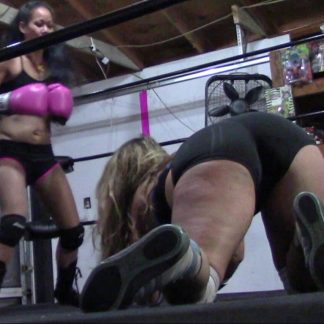