View cart ““Paper Champ!”” has been added to your cart.

Athena Law takes on 21 year old Tammi in this non title bout.  And, Oh my goodness,  Is Athena lucky this was not a title fight!  Being embarrassingly out struck at every turn by Tammi, who is just coming off a big, but easy win, absolutely decimating Alexandria Hamilton, and knocking her out of the ring in “Alex Vs. Tammi”.  Now, it’s Athena’s turn to take a shot at the 21 year old rookie!  Athena gets her licks in, she keeps her hands up and her feet moving, perhaps it was a bad day, because her skill just wasn’t enough withstand the assault young Tammi launched on her, peppering her gorgeous face with combo after combo, rights and lefts, jabs and hooks, uppercuts and belly punches.  Tammi comes out swinging for the fences, landing crippling blow after crippling blow across Athena’s jaw, Jabs flattening Athena’s nose, busting her gorgeous face open!  Athena is all over the ring and Tammi’s gloves, against the ropes and in the corners. the young girl punishes and dominates her older opponent!  With Athena’s face destroyed and a complete mess, she stumbles like a lush, punch silly, and cross eyed!  Tammi wants to make even more of a statement, having already humiliated and spilled the MMW boxing champ all over the ring, its time to send a message to all the other mature MILFS, gloving up and strapping on leotards!  Tammi wants them to know there is new talent about to take over.  Unfortunately, that example is going to be made out of Athena’s once gorgeous, now swollen, leaking, mangled face!  Tammy throws the champ into the corner, Athena is out on her feet and seeing stars as Tammi removes her gloves to send cinder block bare knuckle jab, after cinder block bare knuckle jab, square to Athena’s face!  Athena’s head snaps back and her hair fly’s wildly and Tammi continues to use her face as a speed bag!  Athena falls to her knees,  a mighty champion, now reduced to a dripping, humiliated, worthless, jobber!  Tammi rails back and sends one more MONDO bare knuckle strike across Athena’s cheek, sending her literally flying between the ropes and out of the ring, flopping the mat!  Her limp body slaps the floor like a bag of hammers, as Tammi climbs out to placer her foot on the woman she just mercilessly beat and destroyed!  Athena lie, glassy eyed, and dripping all over the mat!  mouth open, peering up in a daze at the superior woman, and the woman who just destroyed her in her own ring!  Match, Tammi! 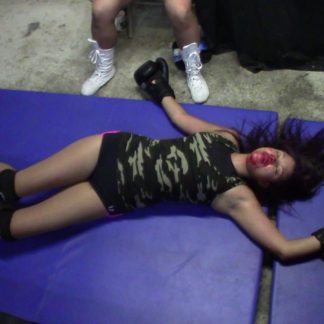