Platinum Fury ambushes Athena Law as she enters the ring for their Barefoot Wrestling match!  Athena is unable to answer Platinum’s assault as she is mercilessly choked on the ropes before being tossed to the outside!  Platinum exits the ring to grab her jobber, ripping Athena up by her hair and tossing her into the ring.  Platinum follow’s and proceeds to dish out a painful beating on the once highly feared Athena!  Just when Platinum thinks this match is in the bag, Athena reverses!  A second wind hits Athena and she returns the favor to Platinum, dominating the blonde around the ring with painful submissions!  Platinum is helpless as Athena continues to impose her will on the battered jobber!  Stomps, belly claws, corner work, and more, Platinum is laid to waste in this ultra-sexy beatdown! 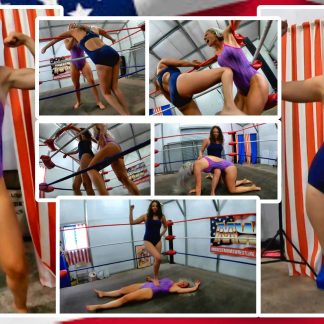